My boys and I took the train into the city yesterday; that has become one of our holiday traditions. We s 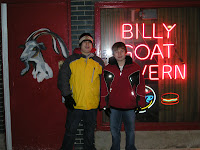 tarted off with a quick late lunch at the Billy Goat Tavern. I wanted them to see the original Billy Goat since they love eating at the location near the United Center. Then we wandered toward Daley Plaza for the Christkindlmarket, but all Colin had on his mind was Garrett's popcorn, and I promised he could get some, but when we got there, people were lined up out the door and out into the street. I promised we would go back a bit later. But that was a little disappointing for Colin. He just knew Garrett's would be closed when we returned.
Onward then to the Christkindlmarket, where I could spend hours roaming around, b 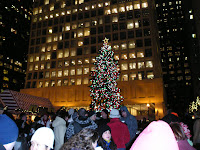 ut my boys really didn't have much interest in seeing any of it. All they wanted was a cup of hot chocolate and to warm up somewhere, but they were good sports and let me do a little looking around without many complaints from them. It was cold and crowded, but we enjoyed it all the same. Hot chocolate, chocolate brownies, roasted almonds, German cookies, and a nice cold pilsner for me...what wasn't there to enjoy?
And we made it back to Garrett's to find a much shorter line. Happiness! 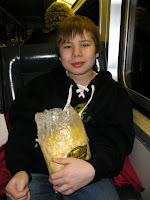