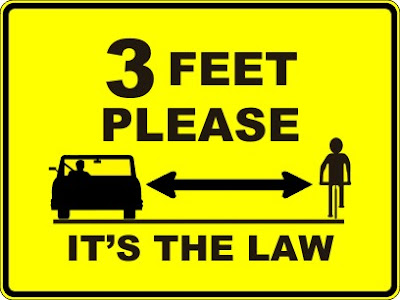 With Labor Day in the mix, it was a shorter commuting week with just 57.06 miles logged for the work days and 62 total for the week. And weather-wise, it was wonderful. The morning ride in all week was consistently in the 60s, right at that range where you aren't sure if you need sleeves or a light jacket, where you start off a bit chilly but quickly get warm just a few miles into the ride. The ride home was consistently in the 80s. With nothing but warm, sunny days, I am still riding the road bike to work. Once it starts getting rainy and messy, I plan to switch over to my hybrid.

This week brought me to think quite a bit more about cycling rights and awareness. As I mentioned last week, I don't think most motorists are knowledgeable about cyclists' rules and rights. I only experienced one rude driver this week, a guy in a big ass pickup truck pulling a big ass camper coming up behind me on Broadway hitting his horn about four times, but every week I have faced this type of reaction from a driver in one way or another, which has led me to do some homework. Did you know it is against the law in Illinois to harass cyclists? Drivers who harass cyclists can be charged with a Class A misdemeanor or a Class 3 felony if injuries are sustained. Drivers also by law are mandated to provide a clearance of at least three feet when passing cyclists. I would like to see just those two bits of information added to the Illinois drivers exam. How else would drivers know this? They are not reading the Illinois Bicycle Rules of the Road unless they are cyclists, and, sadly, there are a lot of cyclists who are neither aware nor following the rules of the road for cyclists. This week I became a member of the League of Illinois Bicyclists and the League of American Bicyclists and plan to do more to further awareness of cycling rights and safety. There are just too many people that I love dearly out there on their bikes. I have to make a difference in some way.
Labels: bike commuting challenge biking goals speak up sustainability work

Kristopher said…
If you want to read more about the rights you have a as a cyclist and the dues and don't on the road pick up this book
Bicycling and the Law: Your Rights as a Cyclist Paperback
by Bob Mionske (Author) , Lance Armstrong (Foreword)
ITS A VERY EDUCATIONAL BOOK, it changed my riding STYLE COMPLETELY due to if something happened things would have been pointed right back to me the cyclist and you know it would have be in the justice system.
http://www.bicyclelaw.com/