On October 11th I flew into Wichita for the weekend to run Marathon #6, the Prairie Fire Marathon. And, WOW, what a fun weekend! Although the Chicago Marathon was happening the same weekend here at home, I had no desire to run it. I had a great experience running Chicago last year for the third time and really wanted to move on to adding both another race and another state to my marathoning experience. Chicago is a must-do, to be certain, and being that it was my first, second, and third marathons and so far my PR, I have a feeling it will always be high on my list of favorites.

So, about Wichita... It is high on my list of favorites, too. I loved that Wichita is an easy city to fly into. The airport is small and mere minutes from downtown. As well, the downtown hotels provide free shuttle service. Within about ten minutes after being picked up at the airport, I was at my hotel. I stayed at the Fairfield Inn, which was a couple blocks from the expo and just steps from the start/finish line. It was so nice to not have to deal with driving, traffic, parking on race morning. Even better, Fairfield Inn provided us with free breakfast, and they had it all... eggs, muffins, toast, bagels, fruit, yogurt, oatmeal, cold cereal, juices, coffee... That was much appreciated! To be able to eat and then walk right over to the start line made for a stress-free race morning.

Too, I was glad that the expo was on Saturday and the race on Sunday. It was nice arriving on Friday afternoon and not having to rush to get to an expo in the final hour before closing, as had happened at the Air Force Marathon. The first thing I did then after checking into the hotel was head out for some Kansas barbecue a few blocks down the road at Bite Me Barbecue. Heaven!! 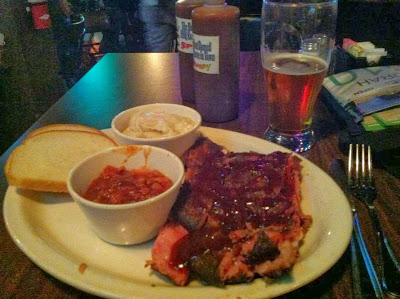 BBQ and a Flat Tire

On Saturday I hit the expo, quite small but still I managed to buy a few neat things, and took a pretty nice walk all over the downtown area: checked out the bronze sculptures all along Douglas Avenue, had a latte at Mead's Corner, found a neat little park, strolled the RiverWalk, ate New York style pizza at Picasso's, watched a few seconds of the Wichita Thunder hockey game, and listened to the musical water fountain. Later in the afternoon, my good running friend Marlon arrived from Oklahoma, and I had dinner with him and a group of Marathon Maniacs. 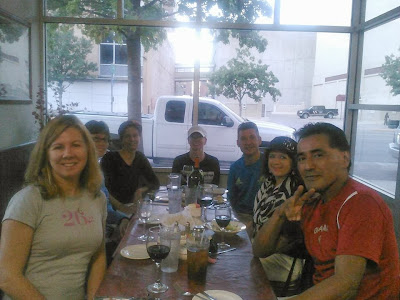 Dinner with some Maniacs

And after all that fun, on Sunday I ran the 26.2 and then some as the course was about a half mile too long, finishing in 4:52:47. Still nowhere near a Boston qualifying time, but I'm not so sure I care right now. I'm having fun. I know I need to get a lot more mileage in if I'm ever going to make Boston. That's still a goal, don't get me wrong, but I realize it is going to take some time yet. I'm just going to keep on moving forward, and when it happens, it happens. 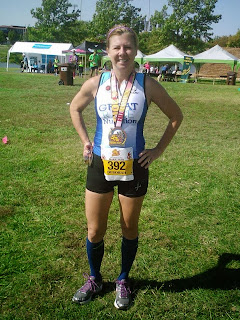