Me and Dublin...We Did Okay Together

When I first arrived in Dublin, I was overwhelmed, to say the least. Traveling as a single woman, I had a bit of an anxiety attack my first night. There I was in a much larger city than I expected in a hostel in a "dicey" area wondering suddenly why I was so far from home and all alone. As I walked O'Connell Street that first day, all I saw was garbage (rubbish) on the streets, graffiti, shady looking people. I saw Dublin merely as another large, dirty city. As I lay in my hostel bed, all I wanted was to be in my own home with my kids and dog. All I wanted was to be near my friends. I seriously felt panicked and wrote a couple of friends telling them I wanted to go home that minute. I was contemplating cutting my trip short.

I thank God for my friends. They know me well, and they know my stronger side. They reminded me through email how long I had planned this trip and how much I looked forward to it. They told me I could do this. And that if I didn't I would regret it. Even my kids wanted me to have a good trip, and here I was lying in bed feeling guilty for leaving them behind. My older son Nick's email reply was short and to the point: "You should book some tours." In a later email, he told me I was just overtired, and he was right. I had been awake for over 36 hours and was wired and unable to sleep...and did I mention ALONE.
Finally I fell asleep and slept better than I had in a very long time. When I woke up the next morning, I was ready to see Dublin with fresh eyes, to not look for the worst but rather the best. Glad I did. 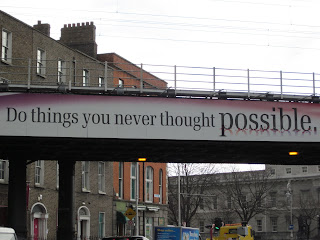