Most disappointing marathon yet. I hate to focus on the negative, but this was not a great experience at any level. I don't recommend this marathon and don't plan to ever run it again. I had really been looking forward to this one, too, because my running friends' son recently joined the Air Force, and we were running this in his honor.

The sour taste in my mouth began mid-August when bib numbers were assigned and I saw that I had two bib numbers. After emailing the race director, I was told that I had registered for the marathon twice and that it was pretty much just too bad, no refunds "ma'am." I called Active.com and was told basically the same thing.  Active.com said it was too late and shifted the responsibility back to the race director. Looking back, I know what happened. I eagerly registered for the marathon on the very first day of registration, January 1st. I was attempting to register through the Active.com mobile app and wasn't having any luck. When I got to the end of the process, I just got the swirly loading thingy, and the process wouldn't continue. I didn't receive a confirmation email and could not find any record of having been registered in my Active.com account. I waited a fair amount of time and still received no confirmation email. Eleven hours later I went to my laptop and attempted to register again from the actual Active.com website. This time I received a confirmation email, which I immediately as always transferred to my Race Registration email folder, and never gave it another thought.

Then come August I see that I have two bib numbers! Huh?! I know this was a glitch on Active.com's part. This is exactly what happened to countless people during the fiasco of a registration process for the Chicago Marathon. What really put the icing on the cake, though, was to be told by a race volunteer distributing bibs at the expo that this had happened to a lot of people. Shame on you, Active.com and Air Force Marathon.

The marathon itself was completely lacking in all respects...opening ceremony, course, entertainment... I honestly didn't enjoy one minute of it. There was no flyover as advertised. Sure, that is the government's fault, I suppose, due to the whole sequestering nonsense. But perhaps the Air Force should have mentioned this in their emails and on their website and Facebook page. Perhaps I really just missed this as well. I don't know. But that was what I had looked forward to. I thought this would be a very patriotic and somewhat emotional opening ceremony. You know, powerful and memorable in some way. It wasn't. We got to the start line after walking what seemed like 26.2 miles to get there, and the next thing I knew we were all moving. Seems as if they could have put together something somewhat special with or without a flyover. I honestly felt as if those in charge perceived this marathon as a lot of extra work for them and they just wanted to get it over with.

The course was comprised of roads around the base and not the least bit scenic. I didn't expect Big Sur kind of scenery, but there was nothing of interest along this course. The best part was running through the small downtown area of Fairborn. And race volunteers were great. Kudos to all those people who come out and spend hours on the course cheering on and guiding runners, stopping traffic, and handing out water and sports drink. Oh, and the medal and race shirts were great, too. Of course, I now have two shirts to wear...just one medal, though. ;) 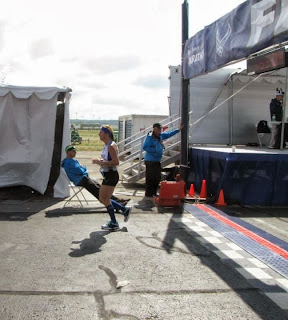 Crossing the finish line. I'm beat, and my feet hurt like hell. I switched up my shoes and ran with SuperFeet insoles, which I now have come to blame for blisters. I ended up with four huge blisters on my feet. 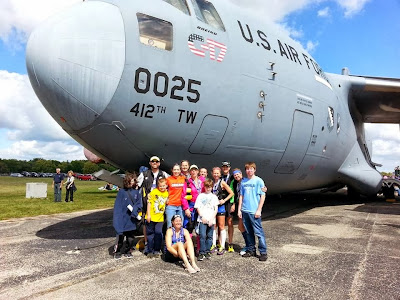 So glad to have good friends and my son with me. This was truly the best part of the whole weekend.

My finish time was 4:48:22, far from my Chicago Marathon time and nowhere near a Boston qualification. I have some work to do to get that time trimmed down to a Boston qualifying time of 3:55. I am not going to give up on that goal, but realistically I know it isn't going to happen for awhile. In the meantime, I will journey on... and live and learn as much as I can along the way.