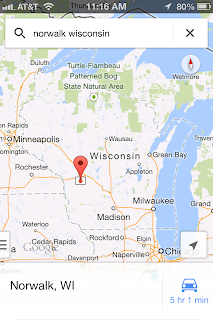 On Saturday, November 2nd, I drove five hours north into Wisconsin to run marathon #7, the Rails to Trails Marathon. The marathon is in Norwalk, a little town of 638 residents according to the 2010 census. There are no hotels there nor cell phone service. I stayed about 20 miles away at a Super 8 in Tomah.

I found out the hard way that there is no cell phone service when I lost signal on my way from Tomah to the packet pickup over in Norwalk. I typed the Norwalk Community Center into my Google Maps and headed onward without a second thought. Yet, Google Maps led me to the community center in another teeny tiny little town named Wilton and announced that I had arrived at my destination. However, nobody and no thing were in sight in this little town of Wilton. And no cell service. I didn't know where I was or even whether I had been going in the right direction at all. I turned my car around and started heading toward a cell signal. Once I was again connected to the 21st century, I saw that I had been within six miles of Norwalk when I was dumbstruck in Wilton. I turned my car around once again and headed back toward Norwalk.

Finally arriving at the Norwalk Community Center for packet pickup and free spaghetti dinner, I was welcomed by some of the friendliest people I have ever met. It seemed that the entire community was volunteering for the race, people of all ages and all sizes and eager to say hello and find out where runners had traveled from. I didn't spend too much time hanging around there though. I was tired after driving and getting lost and wanted to get back to my hotel to get all my race gear laid out.

The drive back to Norwalk the next morning for the marathon was much more relaxing and actually quite beautiful with rolling fields, gorgeous fall foliage, and Amish-driven buggies traveling along the highway. I got to Norwalk with more than enough time to park and get mentally prepared. It was quite cold, though, but the sun popped out eventually, and even with a pretty gusty wind beating at us the entire time, this marathon undeniably held up to its promise of charming and picturesque rural landscape. I never run with my cell phone, and what good would it do here anyway without cell service? But I carried it with on this run so that I could take a few pictures. As usual, pictures just don't do justice to the experience. 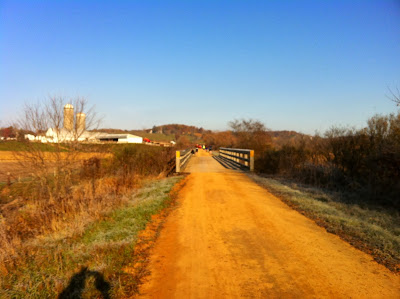 To me, the best part of this flat out and back course is the .75 mile cavern-like tunnel, dark and eerie with water dripping from the top and down the sides to pool along each side of the trail like a moat. It felt very medieval. 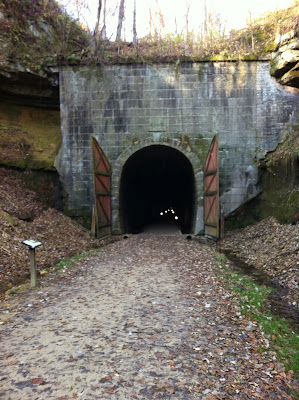 I felt as if I was running at a pretty good pace and would do better than my 4:52 finish at the Prairie Fire Marathon. I was hoping for a 4:30 pace, and was on target, but I must have really slowed down in that last six miles. I ended up crossing the line at 4:45:40. I was happy nonetheless. I not only finished my seventh marathon in my fifth state, but, having run three marathons in 44 days, I qualified as a Marathon Maniac, a goal I had hoped to reach this year. 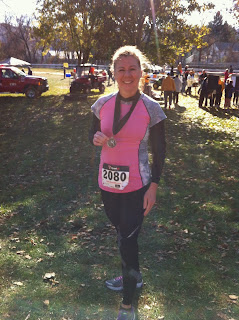