On The Go in Topeka, Kansas: Spring Break, BBQ Sauce, and Separation Anxiety

I just returned from a little whirlwind car trip to Topeka. 1126 miles in three days. And, for once, I didn't have to drive. My awesome 19-year-old son did every bit of the driving. I love this part about getting older, when your kids become adults and allow you to depend on them a bit. Well, I know not everyone has responsible, loving children, but I do, and I am so grateful for it. I always want to be a part of their lives. My two boys and I have a lot of fun together, and I savor these times because realistically I know that their lives will probably be changing a lot in the next few years, and they are probably going to meet someone and establish a life with someone who doesn't really relish Mom sitting in the middle seat tagging along on adventures. I'm prepared for that.

But in the meantime, I'm riding shotgun.

The purpose of this little adventure was to take Younger Son on a college visit. The whole plan came to fruition pretty quickly, just a couple days before departure, and went kind of like this...

Text to Son #1 late one night: What do you think about us taking a road trip to Topeka, Kansas, over break so Colin can visit Washburn University?

Son #1: Sounds good to me. How about Sunday, Monday, Tuesday?

It was that simple. Plans were underway with two conditions from Son #1: that he could do all the driving and that we stop at Oklahoma Joe's in Kansas City. Sounded like a great plan to me. And the response from Son #2, a loyal Royals and Chiefs fan who thinks of nothing but moving one day to Kansas City, was "Sweet!" 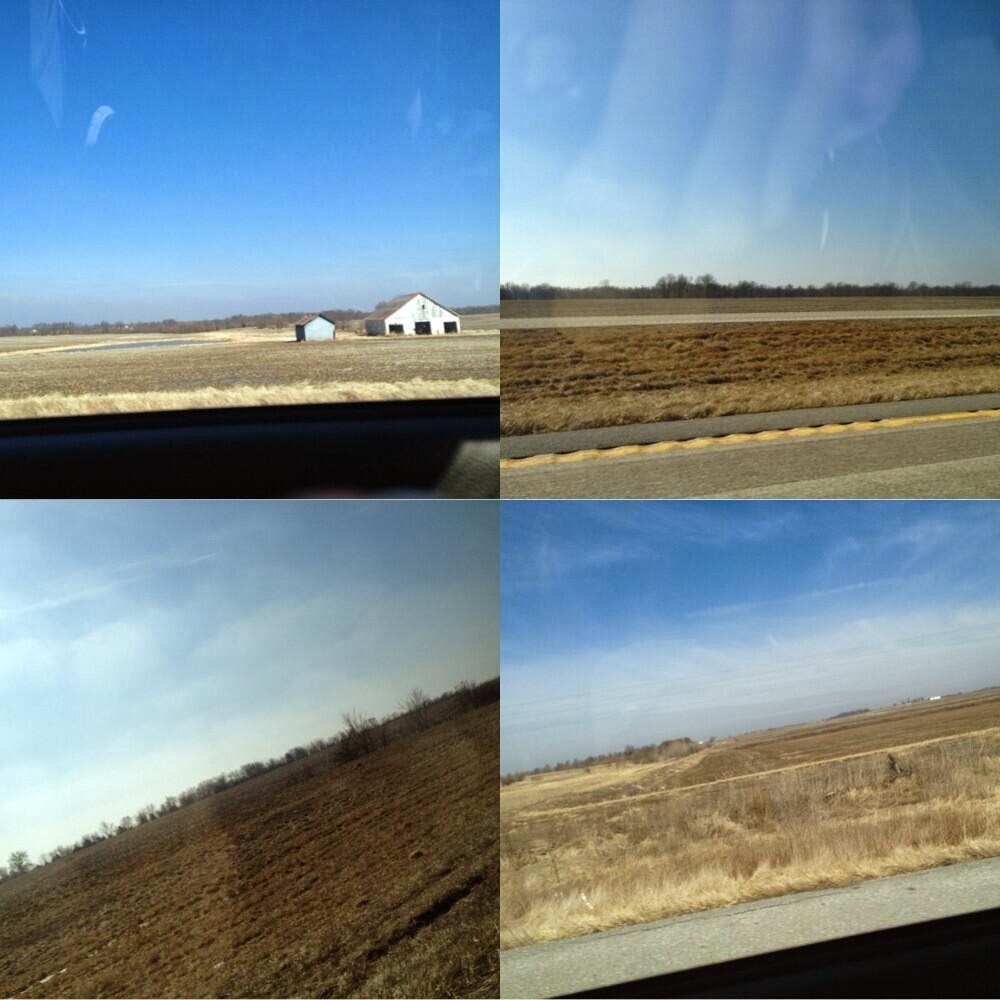 Well, let me tell you, Arthur Bryant's is no Oklahoma Joe's, and none of us wanted to be the first to say it. After all, Arthur Bryant's is supposed to be one of the best BBQ joints in KC right along with OK Joe's. But it was downright disappointing. The meat was really dry and the sauce was sour-like, definitely a vinegar-based sauce with a prominent peppery overtone. Not a fan at all. Sorry. But at least I can say I've been there. And we are all about trying out the top-ranked restaurants when we travel, not the expensive ones, but the ones that make the people's choice lists and the food shows. We always google for "the best ice cream," "the best pizza," "the best burger" everywhere we go.

Monday in Topeka was downright delightful. 75 and sunny. We so needed that. We have had nothing but snow in Chicagoland the entire winter. Snowstorm after snowstorm. I left home Sunday morning dressed in boots, a down coat, hat and gloves and probably 20 degrees. The next day we were basking in 75-degree sunshine. Oh my, how refreshing to the spirit. The first time in months that I had gone outside without boots on... without any sight of snow on the ground... without any coat at all on. For two entire days, I was sans coat and Smartwool socks. Until we returned home Tuesday night to yet another winter storm warning. 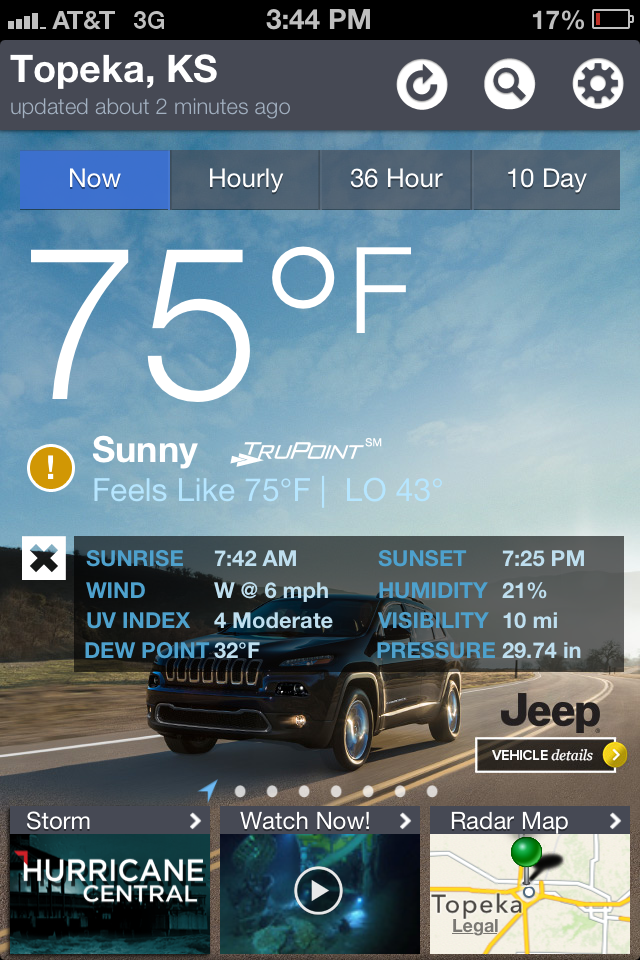 Ahhh. If only for a moment.

So, back to food... while in Topeka, we stopped at the Burger Stand. If you are ever in Topeka, you must go there. It would even be worth driving a bit out of your way for. Truly. Amazing. No words... so I'll just torture you with a picture: 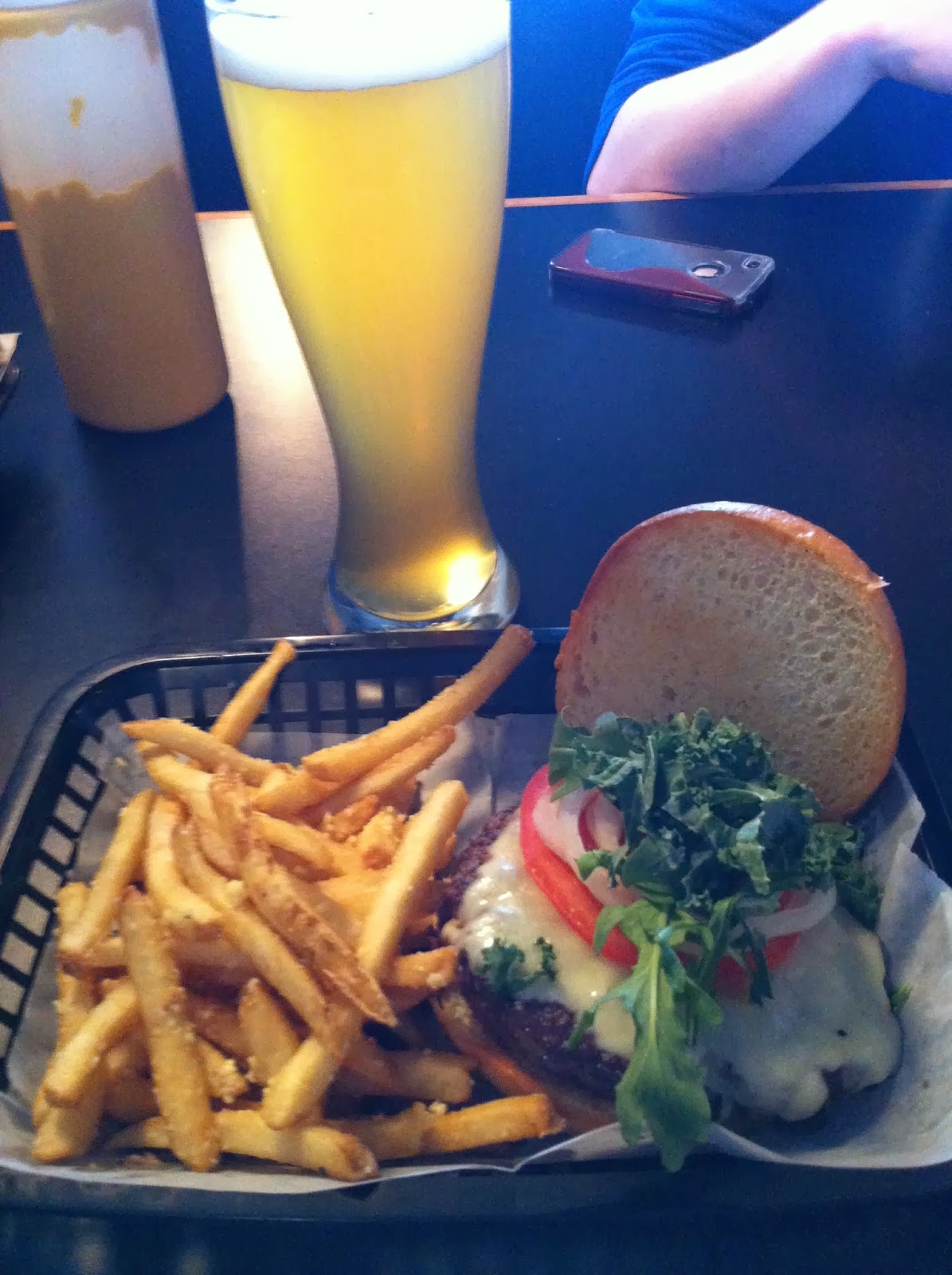 Then on Tuesday morning we decided to skip breakfast and head straight to Kansas City for the 11 a.m. opening of Oklahoma Joe's. We still needed a good BBQ fix. We got there right at 11 a.m., and the place was full already, but the line was relatively short, and we were soon in BBQ heaven. We concurred without doubt that Oklahoma Joe's truly is the best BBQ in Kansas City. We even tried Jack Stack's on a previous trip, so we feel somewhat qualified as wannabe professional foodies. Delicious sauce and tender, moist meat. The only waste was the bit of sauce that ended up on Son #1's t-shirt. 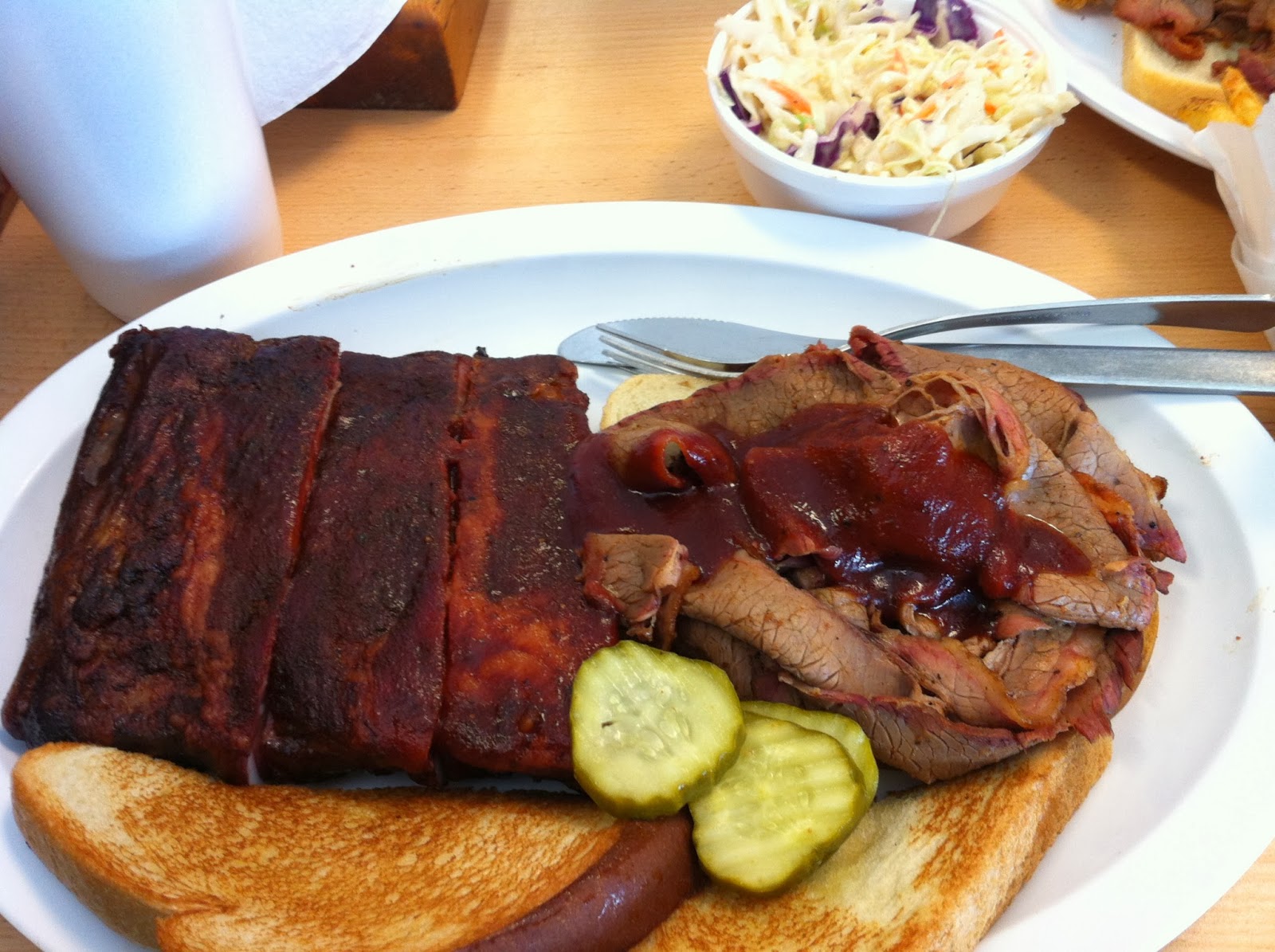 Feeling very much satisfied at finally having completed our Mission from God, we settled in for the next seven hours on the road back toward home, aka Chiberia. Son #2 did what he does best. Slept. And Son #1 drove on, the whole time searching (a bit annoyingly) in vain across the the entire state of Missouri for something other than static to come through the car radio. A futile search. More travel advice: pack a nice selection of CDs. 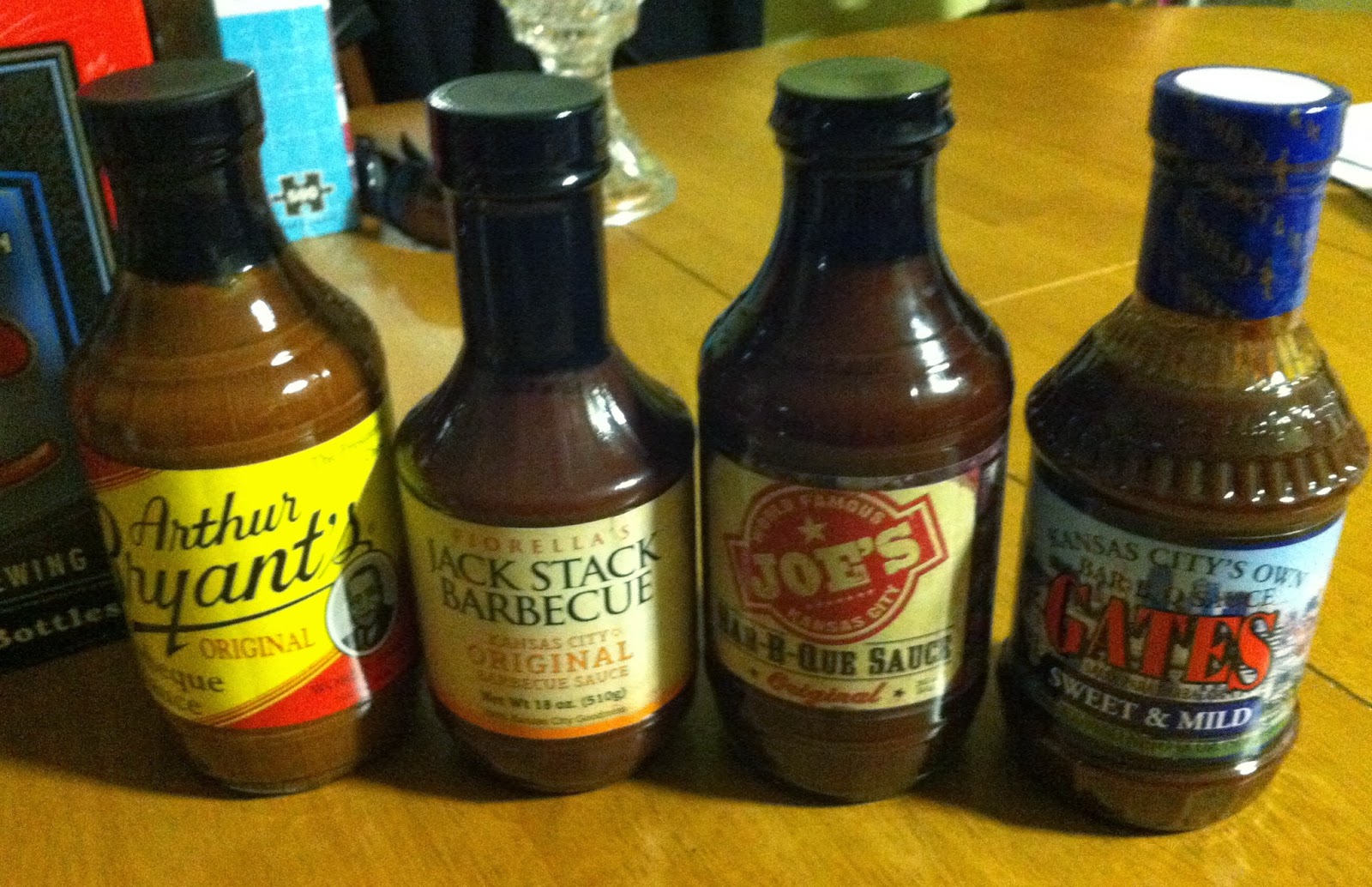 Home Sweet Home with lots of sauce to boot...at last

And of course there's a story behind my prideful display of sauce here. During a trip to KC last summer (in which we flew), I spent the few days there gathering up as many different BBQ sauces as I could find to take home with us. But on the way home, airport security confiscated all my sauce from my carryon. I was devastated. Yes, I know how dangerous sealed bottles of BBQ sauce can be on a plane. (Don't even get me started on common sense post-9/11.)

Yes, it was a long drive in a short time, but I got to spend quality time with my two favorite guys, eat great food, and bring home KC BBQ sauce and Boulevard beer. And, yes, the college visit went very well, too, but that is a whole other story about motherhood and separation anxiety...

And this momma doesn't want to think about that yet.
Labels: my kids on the go travel