Traveling on Amtrak with Your Bike: It's Not All That Easy, Folks

With so much recent press on Amtrak's expanded roll-on service for cyclists, I was truly excited to plan a summer train trip with my bike. When the opportunity came to attend Femme/VELO, I was certain this would be the easiest, most economical, most bike friendly way to go to get me and my bike to Whitefish, Montana. I had envisioned easily rolling my bike on the train at my nearest Amtrak station and rolling it off at my final destination.

Well, it wasn't that simple.

I am a planner and wanted to make sure I was prepared and doing everything right, yet I still ran into major hiccups with my little bike travel experience. My plan was to leave from my nearest Amtrak station aboard the 7:13 a.m. City of New Orleans on its way to Chicago's Union Station where I would later board the Empire Builder. I assumed since City of New Orleans is not a roll-on route, I would simply need to get an Amtrak bike box for my bike. Three days before my day of departure, I drove 40 minutes to a Chicago Metra station so that I could train it to Chicago's Union Station to pick up said bike box. At Union Station, I asked a woman working in the member services department where I could get a bike box. She told me I couldn't get one, that I had to wait until the day of my trip and have my train ticket and bike in hand to have it boxed in the baggage department. I still had questions about traveling with my bike and just what I needed to do, so I got in line at the ticket counter to explain my need to first get on the City of New Orleans train from my local (unstaffed) station with my bike. This young woman said, "Just roll it on anyway. It's not a staffed station. No one will be there to stop you."

What I really wanted to know at this point, though, was what my options were now as I needed to leave from my city in three days. The supervisor suggested I drive to Champaign to get a bike box. So the next day I drove 88 miles south to Champaign to get a bike box. I found out in Champaign, however, that I would not be able to bring the bike box on board at my station since it is an unstaffed, no baggage check station. Ugh! The folks I spoke with on the phone and at Union Station all told me I would simply bring the bike box on board at my station and check it in on arrival in Chicago. Well, that isn't how it works. After explaining to the Amtrak employee in Champaign how much time I had now invested in this process, how many employees I had spoken to, and how inconsistent the information had been, she said she would write a note to the train staff to see if they would load my bike box at my local station. There were no guarantees. She sold me a box ($15), charged me the special item fee ($10), and gave me my baggage claim tags.

I did not know what to expect when the City of New Orleans arrived at my local station the morning of my trip. I knew there was the possibility I would not be allowed to board. I had to just wait and see. My son drove me to the station, and I told him to wait in case I couldn't board with my bike. I didn't know what my plan would be if I couldn't.

The train was 45 minutes late. When it arrived, the conductor immediately came straight toward me, and in a very stern voice said, "This is ONE-TIME ONLY! Never again!" He made himself very clear. I was grateful. I would get to Chicago then Whitefish and figure my return plan out later.

For my return trip, my gal pals drove over an hour to Chicago during rush hour to pick me up at Union Station.

After hours and hours of research and experience now invested, here is what I learned about traveling with a bike on Amtrak:

The good news from all this is that my bike arrived in Whitefish and back home totally unscathed. The hardest part about all this was getting correct information and lugging the box and my backpack and my other bag around to and from the stations. I learned a lot from this experience.

And, yes, I would travel with my bike on Amtrak again. 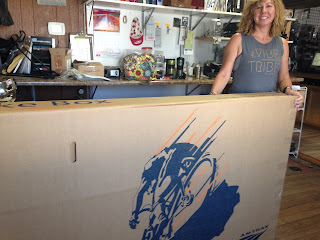 Seriously, the Amtrak bike box is huge and awkward! (But requires minimal disassembly of your bike.)