Back on the Bike! 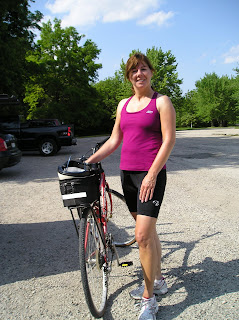 I posted this pic for Trisha (who just bought the coolest bike ever) so she could see my (uncool) bike, but you can't see much of the bike here...lol. This was my first post-surgery bike ride as well as my first summer ride. Last Friday I met Deisy at the state park, and we biked the 21-mile bike trail. Oh, was I aching that evening! I don't like to take medication, but I eventually broke down and took an ibuprofen to relieve the intense pain in my knees and hips. I recovered, though, and went back out Monday and then again on Tuesday, with no need for pain reliever.
Now I am thinking about going on a bike trip in August, six days biking from northern Wisconsin to southern Wisconsin. Three days of biking, I guess, makes one feel a bit invincible. It reminds me of fifth grade when I hit a plastic baseball across the gym with a plastic bat and got a grand slam homerun; I was ecstatic and went home and told my brother that I wanted to be a professional baseball player. He just made fun of me, of course, and my dream of being a professional baseball player was short-lived, didn't last beyond that one particular day.
I'm serious about the bike trip, though. I've been thinking about it for several days now, so it has a good shot at becoming reality. Right now, however, I have to interrupt my training to go on a seven day cruise where I will be indulging in buffets rather than bike rides. I am going to try to stay active on my vacation, though (Okay, go ahead and laugh; I am not entirely convinced myself). I'll keep you posted. ;)
(And don't ask me why my formatting is all messed up! Ugh! Blogspot has a mind of its own.)
Labels: biking

Trisha said…
My formatting keeps going screwy too. You can change the div stuff to br/ for one break and double it for two. I had to eliminate the <> in order to post.

21 miles sounds horrifying right now. I'm definitely going to have to work up to that unless it includes numerous breaks and a lunch.
6/03/2009 7:46 PM

Deborah said…
Okay, so you will have to come on my birthday bike ride this year. It includes a break with lunch at the state park (maybe we can even sneak a bottle of wine in at some point...lol...and hopefully not end up in the Kankakee River.)
6/04/2009 8:24 AM