Last year was the year for getting used to the idea of road cycling. My previous cycling life had consisted pretty much of loading my hybrid onto the back of my truck and driving three miles to the state park trail where I would ride the 10 1/2-mile partly crushed stone and partly asphalt trail out and back and ultimately feel pretty accomplished. The idea of road riding really scared me. I'm not even sure why I bought a road bike last year. I think it was because I was entertaining idyllic notions of lovely country bike tours. I clearly remember telling my local bike shop guy in these exact words "I will NEVER be racing." The truth is I was terrified of many aspects of road riding -- of sharing the road with cars, of being physically attached to the bike by clipless pedals, of riding without a mirror on the handle bars.

But I managed. Within a couple weeks, I had conquered the clipless pedals and had commit 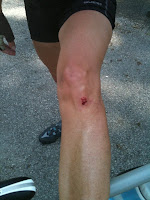 ted to some bike tours, Chicago's Bike the Drive and the L.A.T.E. Ride, and the really big event came in June when I embarked on the two-day, 100-mile Le Tour de Shore with three friends. The Le Tour de Shore was an amazing experience, and probably the one event that cemented my love for road riding and fueled my desire for longer cycling adventures. Riding 66 miles the first day of the tour was the farthest I had ever ridden in one day, and I was beyond ecstatic. But later in the summer, I topped that with an 82-mile ride at the Two Rivers Century, now my longest one-day ride ever.

As summer progressed, there were many more memorable rides with friends beyond tours, for instance, a 67-mile ride from Bourbonnais to Mokena battling a 25 mph wind to eat at Tribes Alehouse. 2011 suitably ended with a 20-mile New Year's Eve ride to Yanni's Cafe in Manteno for breakfast with those same friends on a 33-degree day. 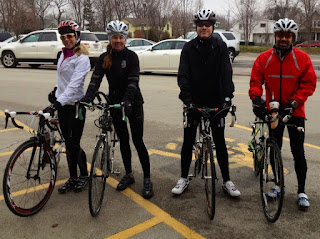 Yes, looking back 1,500 miles later, there were cold moments, wet moments, fearful moments -- but so many more amazing moments that could never have happened had I continued to limit my riding experience to one solitary trail. And, so, just as my friend Julie and I were saying to each other yesterday as we were guessing our way to Aroma Park on a 35-mile ride, we live and learn.