Boston: Know You're Not Alone 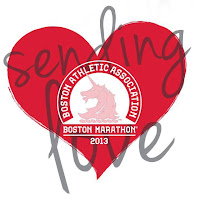 Today, one week after the horrific turn of events at the Boston Marathon, I, like so many others, struggle to process all that has taken place these past seven days. I have been trying to write this blog entry for an entire week. My thoughts were not, and still are not, really all that coherent, and I certainly did not want to write a post detailing my own inner sadness.

I first heard the news on Facebook. I was following posts by friends and running-related pages tracking the progress of individual runners they knew. Like so many marathoners, I, too, dream of one day qualifying for and running Boston, so to read the progress of these individuals with actual names and faces was both exciting and inspiring. One particular post stands out. The guy behind the Distant Runners page had posted that his wife Devon had finished and how very proud he was of her. I felt his joy and deep pride in her accomplishment. Just minutes later posts began coming through about the finish line explosions. I began moving back and forth between Facebook and Yahoo News in search of more details. No real details. And as we waited, the number of those injured rapidly increased...first 20, then 73, then more than 140, and three dead. No longer were there joyful posts about whether an individual had finished but whether they were safe, alive, well. I follow several running group pages, and the mood was frantic as running clubs sought information regarding their members:

"Has anyone heard from Mel?"
"Please post names of those you know are safe."
"Who have we still not heard from?"
Having finished just over the four-hour mark, the Distant Runners' wife Devon missed the explosions by mere minutes.She had been on her way back to the hotel when the bombs went off.

Things got uglier by the minute as we followed the news and listened to personal stories of those affected and watched anxiously as law enforcement began the search for those responsible. In the days thereafter, there was so much sadness to process as our hearts went out to Boston, and the processing will take a good while longer for most of us, I think. Yet, many of the stories that emerged and continue to emerge have given us hope, reasons to still believe in goodness and purity and brotherhood, and, as light shines on, a refusal to become swallowed up in the darkness of tragedy, of terror.

In an Associated Press article, Dr. Horacio Hojman, associate chief of trauma at Tufts Medical Center, said of the injured, "Despite what they witnessed, despite what they suffered, despite many of them having life-threatening injuries, their spirits were not broken, and I think that should probably be the message for all of us -- that this horrible act of terror will not bring us down."

Then there is the story of Brent Cunningham, the marathon finisher from Sitka, Alaska, who stopped to console a distraught Laura Wellington and handed her his race medal upon learning that she wasn't able to finish. He said, "She needed it more than I needed it. I just wanted her to know that 'you're worth it.' With everything that has happened, our world is looking for hope. My whole life is about loving God and loving others. That's who I am."


As we move forward, in memory of Martin, Krystle, Lingzi, and Sean, and all of those physically and emotionally injured by this tragedy, may we all continue to follow the light and somehow pay it forward. In the words of Mother Teresa, "Spread love everywhere you go. Let no one ever come to you without leaving happier." 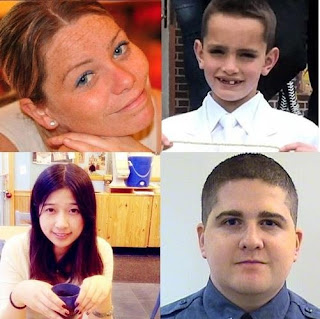