Updated: The Running (and Biking) Bucket List: What's on Yours? 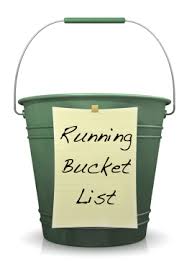 This is so unlike me. Just halfway through 2013 and I have 2014 tentatively mapped out. My friends won't believe it when they read this. I have laughed at some of them who say they are doing such and such race a year away. My usual response is "I don't know what I am doing next weekend much less a year from now."

That type of mindset works fine and dandy when you aren't particularly attached to being able to participate in an event and when there isn't much involved in doing so, say when it's a local race with no cap. But I've had to rethink my habits now because my racing interests have changed quite a bit and the types of events I am focused on right now sell out instantly and require more planning both training-wise and travel-wise. The 2014 Big Sur International Marathon, for example, sold out in a record 59 minutes when registration opened on July 15th.

So at this particular moment, here is my RUNNING BUCKET LIST for 2014:

April
Purdue Boilermaker Sprint Triathlon ...maybe (either this or Allerton if they fall on the same date)
Allerton Trails Half Marathon
Kentucky Derby Marathon

I want to add more biking events and at least one 50K in there, but God willing, income willing, time willing, health willing, I have a bit of a plan for 2014. And I am really looking forward to undertaking new challenges, experiencing different events, traveling to new places, sharing the joy with both old and new friends, and  representing for Great Race Nutrition, Swirlgear, and Running Buddy. I would love to hear what's on your Running Bucket List. Whether it's your first 5K or your 20th marathon or your 100-mile ultra, please share, because it's all exciting to hear about.
Labels: athlete ambassdor biking goals running running buddy swirlgear tri life

Deborah said…
Kona is on my longer bucket list! Hopefully 2015. I'd also one day like to do Detroit, Bay of Fundy, Napa Valley... I'm looking forward to hearing about your upcoming marathons, Kelli! Very inspiring to see Boston there!
7/29/2013 2:46 PM

Courtney said…
Not sure which year, but I definitely have Creede Mountain run mapped out in my future. It's 22 miles straight up and down the jeep trails in southwestern Colorado. When you get to the top you actually run on the continental divide and then you turn around and do it in reverse. You have to prepare for any and all weather. Could be hot when you start, but then be snowing when you reach the summit. SOUNDS AMAZING! :)
7/29/2013 5:00 PM