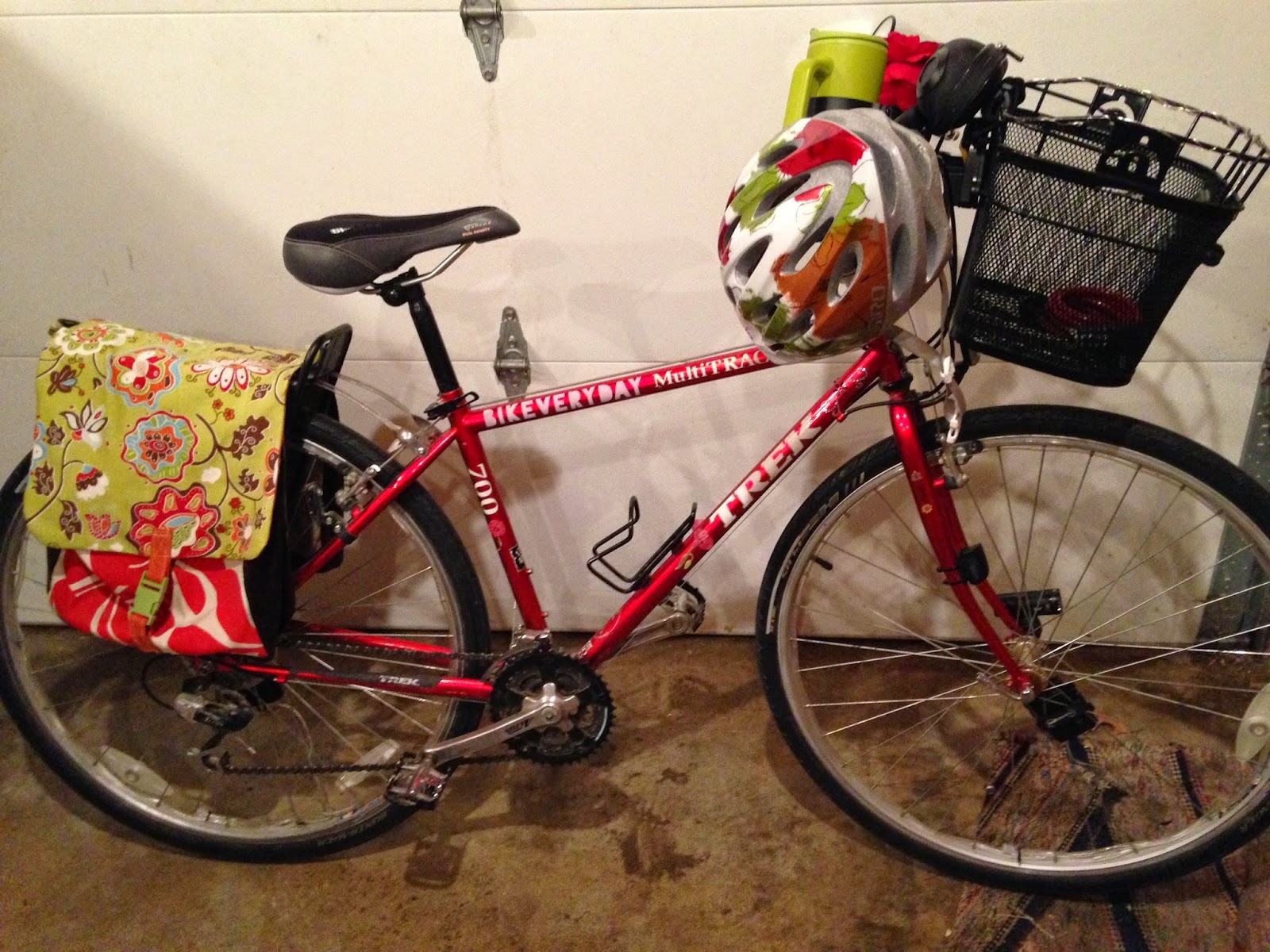 This little ditty is about my very first adult bike, a Trek Multitrack 700 named Stella. From my online research, I have concluded that she is a '97. My ex-husband and I both bought these hybrids at our local bike shop to do some family bike riding. Our son, Nick, would have been about three years old, and our son, Colin, about one. We bought a bike trailer for me to pull Colin in, or both boys if out biking alone, which didn't happen too often, and a trailer bike that we attached to my husband's bike for Nick to ride. Our rides were short and local, perhaps just an after dinner jaunt around our neighborhood or, if really motivated, on over to the adjacent neighborhood. Once in awhile we'd take the bikes out to the Kankakee River State Park Trail.

We were very inexperienced cyclists, and our bikes spent a lot of years sitting in the garage. I doubt that we even put 200 miles on those bikes.

Somewhere around 2009 I had taken a renewed interest in Stella, which I had not even named at that point in time. I would load her on the back of my Xterra and drive to the Kankakee River State Park Trail to ride her. Once, I drove over to Channahon for a ride on the I & M Canal Trail, and, after getting caught in a massive thunderstorm and subsequently covered from head to toe in mud, I felt quite accomplished as a cyclist. Eventually, I started riding her over to the state park, just three miles away, instead of driving over there to ride, and more and more I gained confidence and transitioned from trail riding to road riding. In 2010 I rode Stella in the inaugural Two Rivers Century. I didn't ride a century; I opted for the 22-mile route. I soon realized I wanted to do more road riding, and in 2011, I bought my first road bike. Stella then was abandoned for a time.

Last winter I dusted her off and decided to really have some fun accessorizing her. I got on Etsy, Amazon, and all sorts of sites and bought all kinds of cool things for her: floral panniers, stickers, a flower bell, a coffee mug, a helmet. This past summer I added a basket and a little speaker box that my iPod connects to. She became my Joy Ride bike. She's the bike I ride down to the farmers market on. She is my bike of choice if I just want to go for a slow, relaxing ride, listening to music and singing along, on a sunny day. 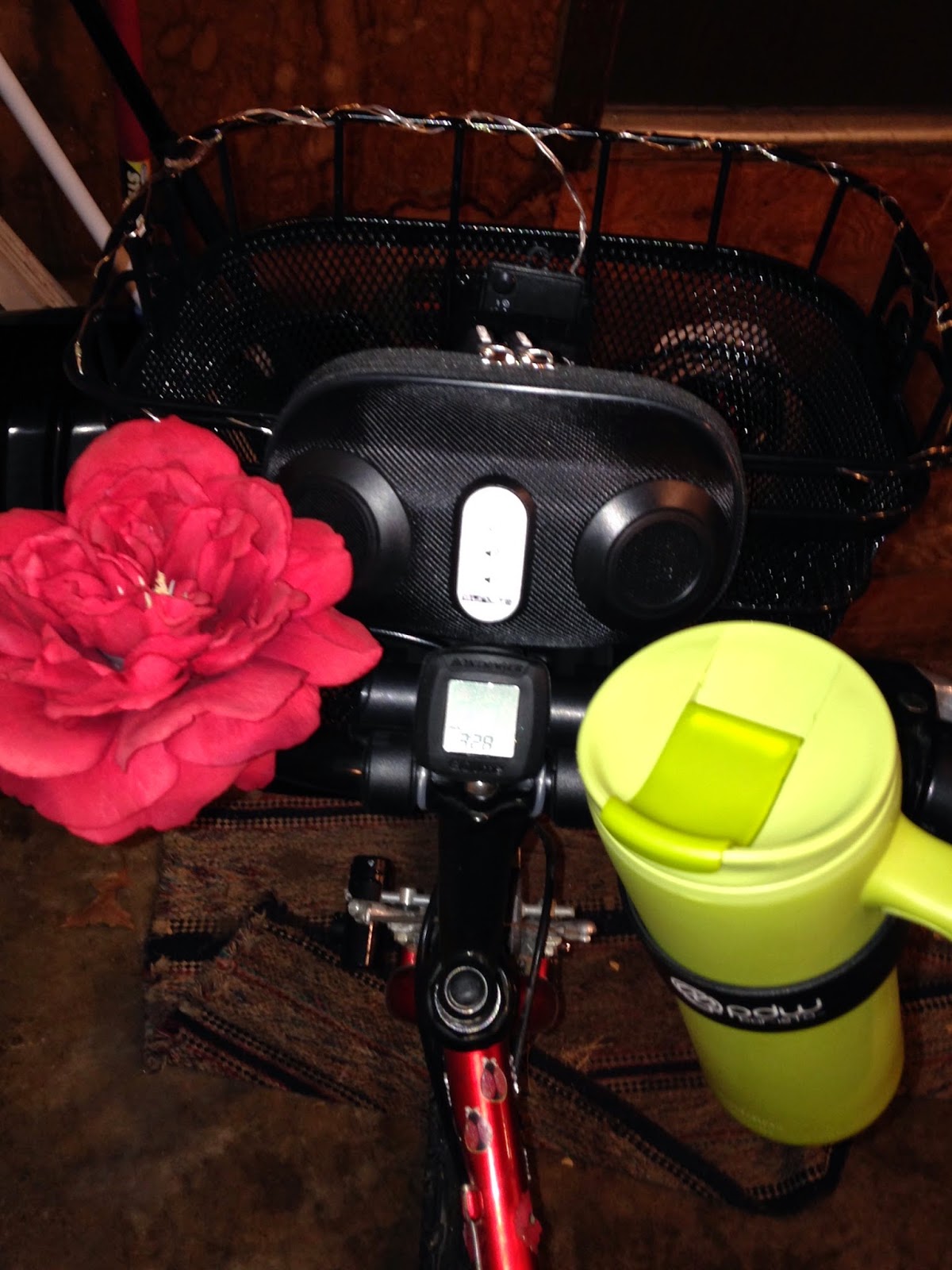 I have a whole lot happening on these handlebars.

This past Christmas I got her all dolled up for the holidays. The most fun I had over the holidays was on this bike. I wrapped lights around the spokes and around the basket and created a Christmas song playlist for the iPod, and off we went. Good. Times. Indeed. There is a story or two about those joy rides. 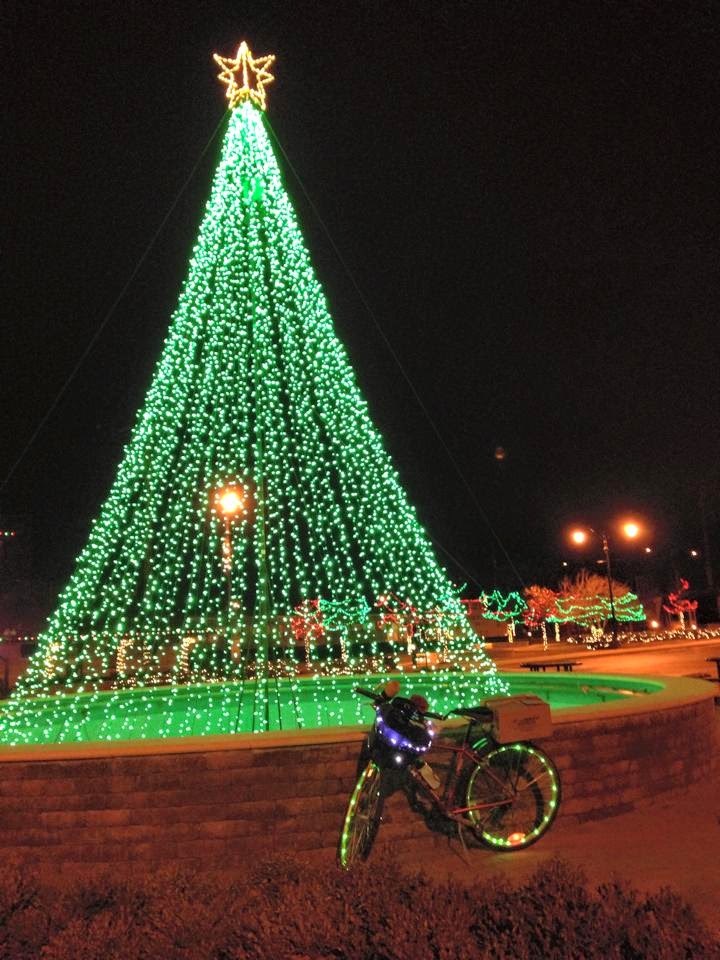 Stella at the Kankakee Depot
(In that cardboard box on the back is a bundt cake that I transported to my book club meeting.)

Let me tell you, this bike is solid, weighing in at 38 pounds. Now I am thinking of adding some fenders, which will add even more weight. Honestly, who knows what else I might add. But what I do know is that I have some great memories of this old gal and have no plans to abandon her again anytime soon. Stella is the bike that started it all for me, this crazy bike love thing that has happened.

And, this, my friends, is the abridged version of the Story of Stella.
Labels: bike stories biking my bikes stella