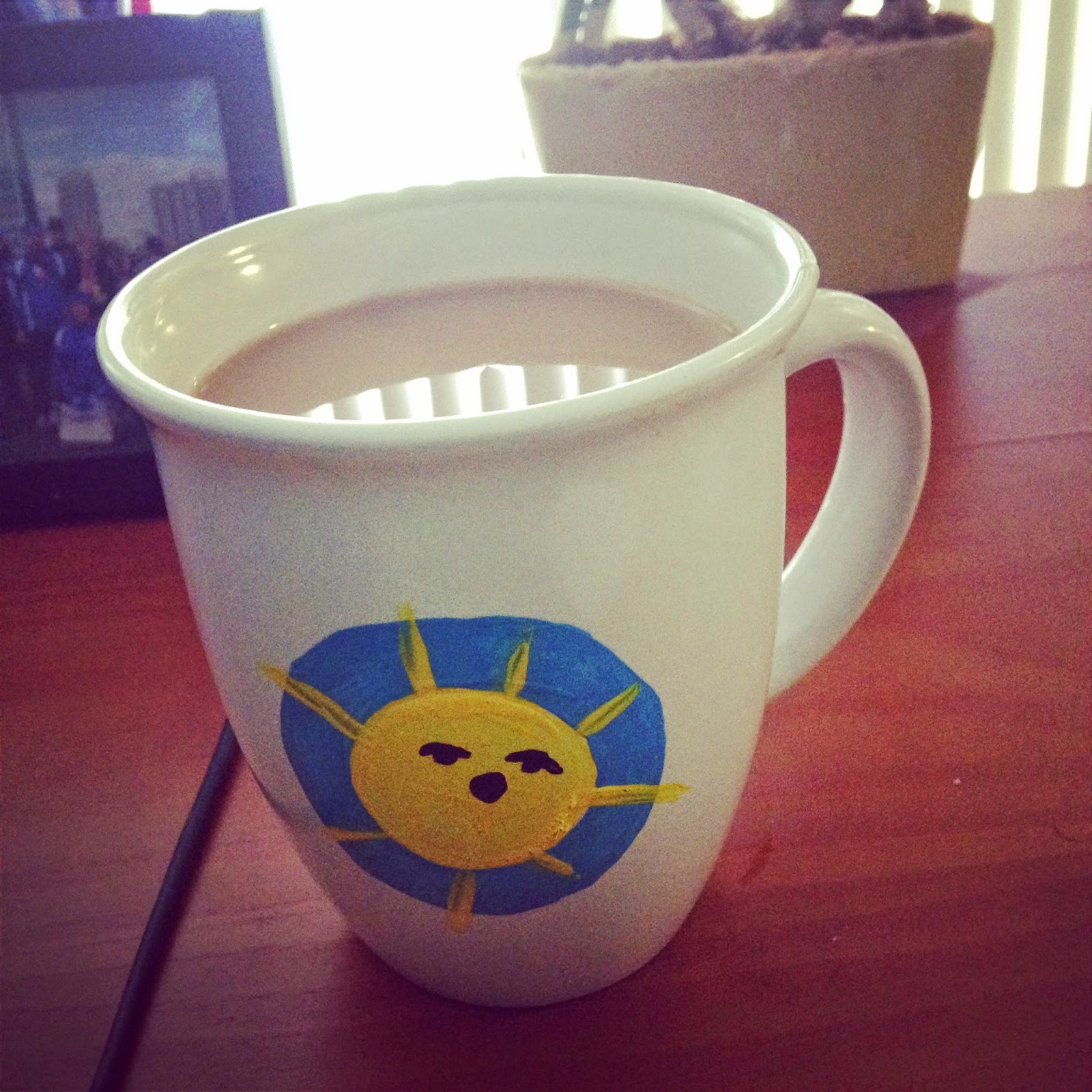 Yes, it has been a long while since I blogged, so you might want to grab yourself a cup of coffee and settle in here for a spell. Looking back now, I think 2014 was really a foundational year for me. And it isn't something I saw happening at the time. But there were "seeds planted" that are leading into great things for 2015. I am dying to start writing about 2015, but I feel I have to give 2014 a proper send-off.

First, let's take a quick peek at those lofty 2014 goals I wrote about this time last year. Oh my oh my, I sure was motivated on January 6th, 2014. Things didn't go exactly as planned, but other great things happened that weren't planned. You just got to go with it, you know. I don't care what all these New Year's goals naysayers have to say, you still have to set some goals. Even if you set 100 goals and only succeed in one of them, you still have succeeded. So, out of that ambitious list of mine, I did read more, bike more, and lost that ten pounds (but I've gained a couple back these past couple weeks...ugh, the struggle).

Here are the running and cycling totals for the year. Running: 227 miles. Cycling: 2,270 miles. Boy, did running fall to the wayside last year. The good thing about that is it won't be too difficult to surpass that number this year. I really got a slow start on the race season but did get a few in the last half of the year:

The real highlight of my year was cycling. In so many wonderful ways. And too many ways to even be able to capture in this brief overview. But here are a few of the projects/events that filled my life with great joy in 2014:

In April I started a local chapter of 30 Days of Biking. I got a handful of people to show up for the kickoff, and the pressure (obligation?) (motivation?) of being the local coordinator was exactly what I needed to succeed in my first 30 Days challenge during a messy April marked by snow, sleet, rain, wind, and a touch of sunshine here and there. Here's a short little Flipagram documenting those 30 days: 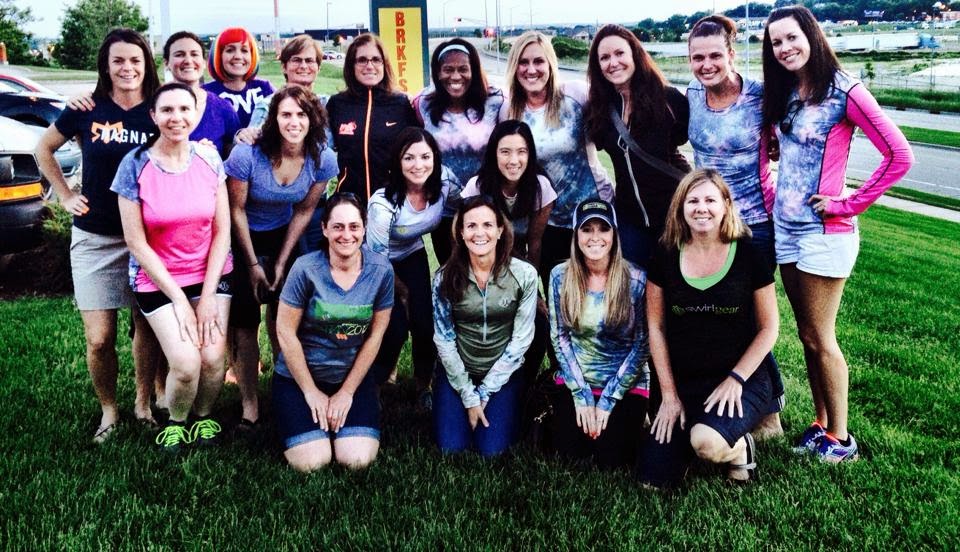 In June I ran the Ragnar Relay from Madison, Wisconsin, to Chicago as a member of Team Swirlgear. Twelve women, two vans, two days, almost 200 miles. And, wouldn't you know it, one of the hottest weeks we had all summer (the other being during the GITAP Ride two weeks later). The mileage wasn't bad. The sleep deprivation was the killer. I met some great gals and am glad to have been able to cross this experience off the bucket list. At this point, I don't really have any desire to do another Ragnar. I like sleep, a lot. Oh, and I almost forgot to mention... our team took a first place finish in the Women's Corporate/Public Service division. (Yes, we were the only team in that division.) 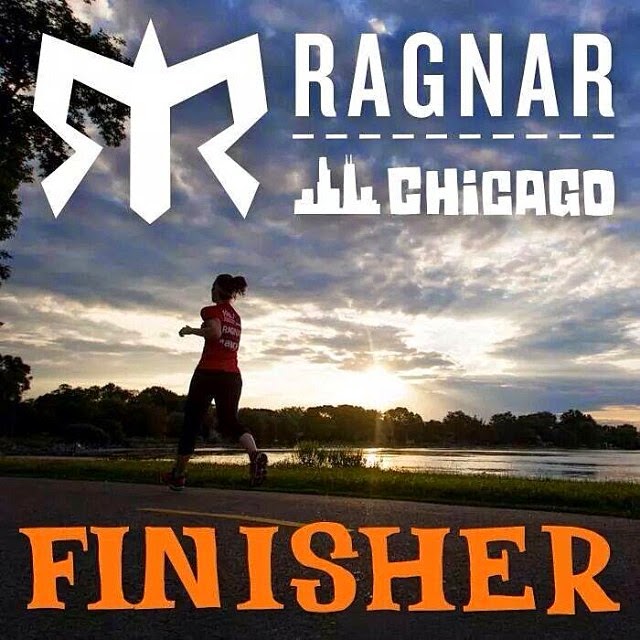 I participated in my first GITAP (Grand Illinois Trail and Parks) Ride June 15-20. GITAP is a six-day bicycle tour organized by the League of Illinois Bicyclists. It is one of those things I read about a time or two and always wanted to do but never did. Well, this year I finally did it. And was that ever fun! I can't remember how many miles I ended up with, but It was 200-something. This trip was one of those big moments of growth for me. I had never done anything like this and didn't know what to expect and was doing it all alone. Well, not really alone. There were 200 other cyclists on this ride, and although I started out alone, I ended up meeting a lot of wonderful people and making more cycling friends. Another truly very rich experience. You can bet I'm doing GITAP again in 2015. 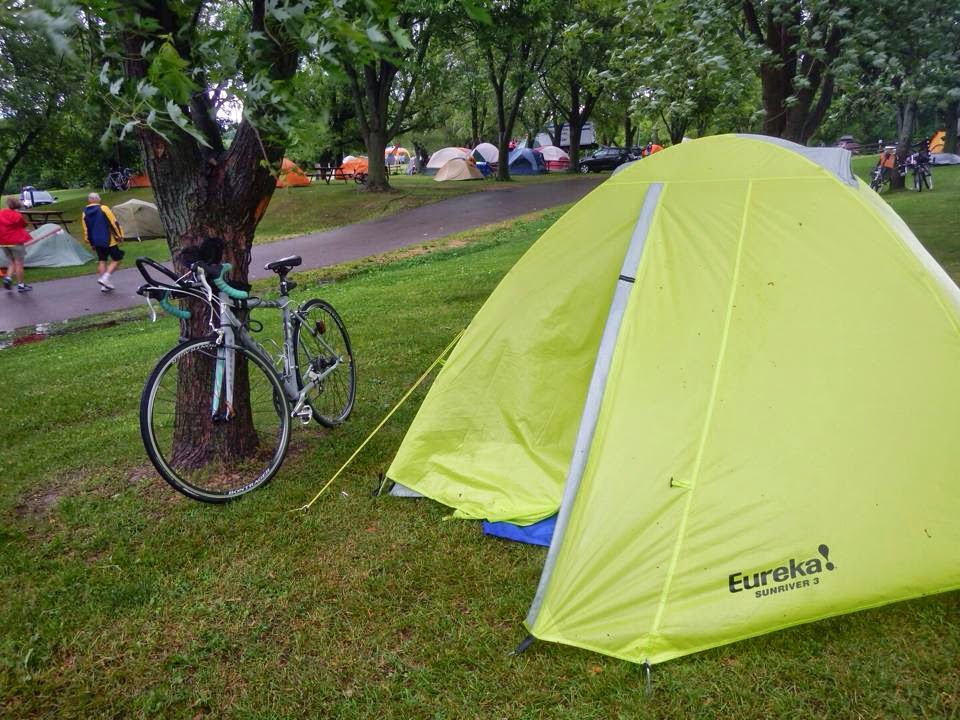 I slept in this little tent for five very wet and stormy nights. One night tornado sirens started going off at 4 a.m. I prayed for my life a time or two as thunder and lightning crashed and thrashed every single night on this tour. Through it all I am happy to say my little tent didn't leak one bit. :) 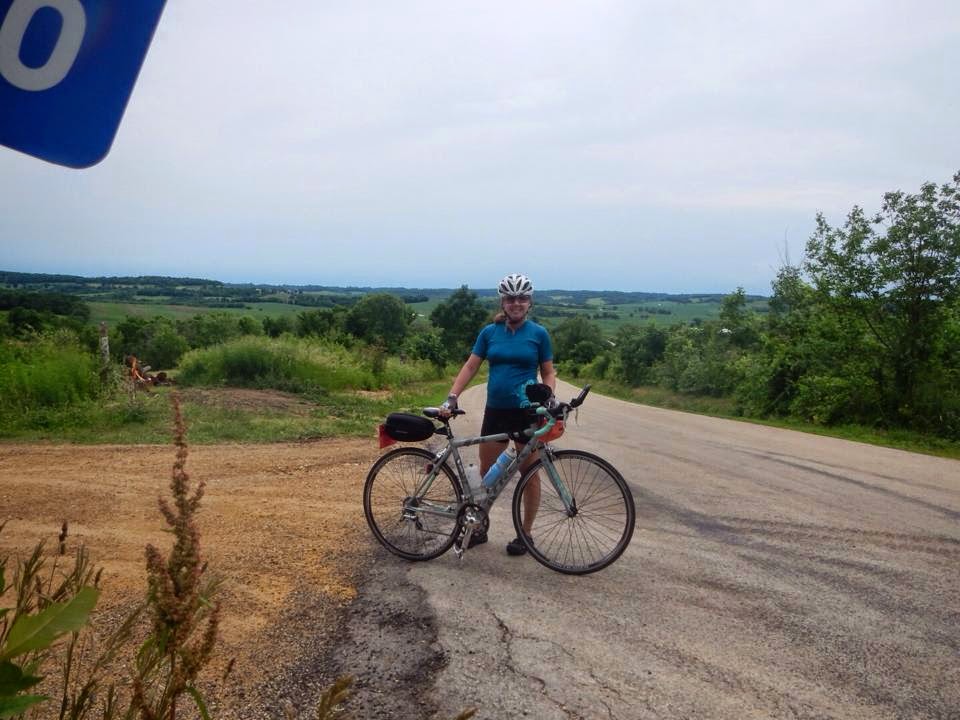 So many new and beautiful places to see.

There was more traveling and a lot more cycling over the year, but I'll cover more of that in additional posts over the next week.

I realized in 2014 that cycling was more than a hobby to me. That it was something that really consumed my life at almost every level, and I loved it. I not only wanted to ride my bike, but I wanted to read books about bikes, take trips centered around bikes, make friends with people who rode bikes. I finally realized what my passion in life is. I know it sounds so cliche. But there are lots of things we enjoy doing and lots of ways we spend our time that bring us a measure of joy. I think, though, that it is very difficult for some of us to really pinpoint our real passion in life. I have spent a lot of time dabbling from one interest to another. Nothing has affected me the way cycling has. And this passion is leading me to great places that I can't wait to share in 2015. I am excited about so many upcoming projects.

So along those lines, in August I became certified by the American League of Bicyclists as a League Cycling Instructor. 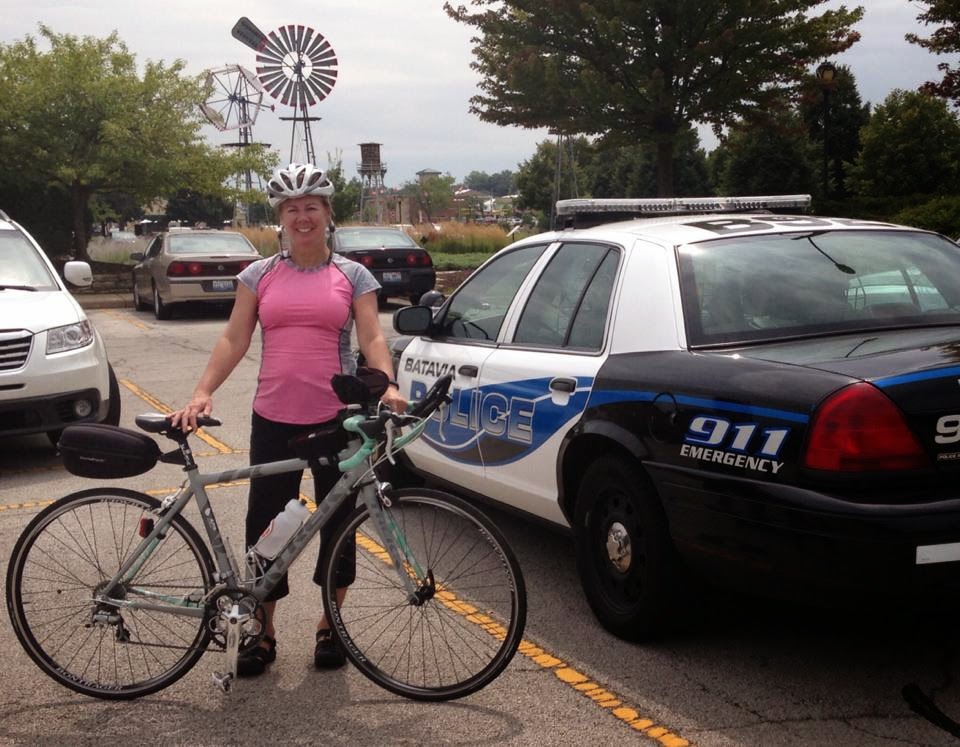 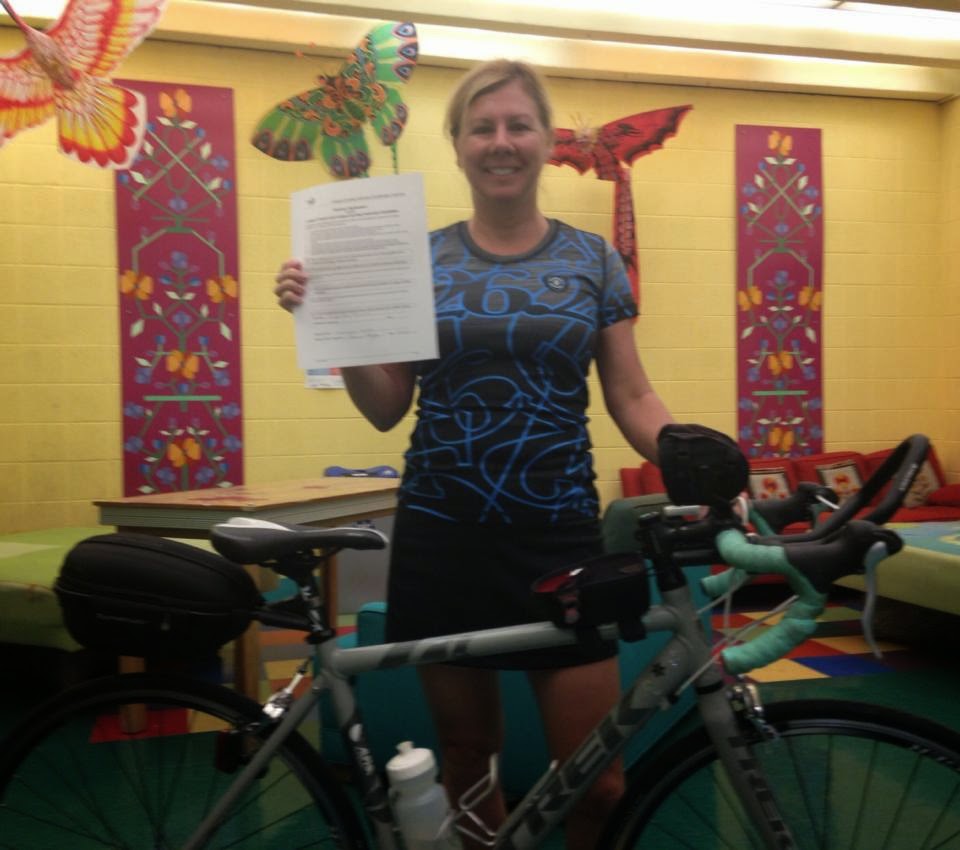 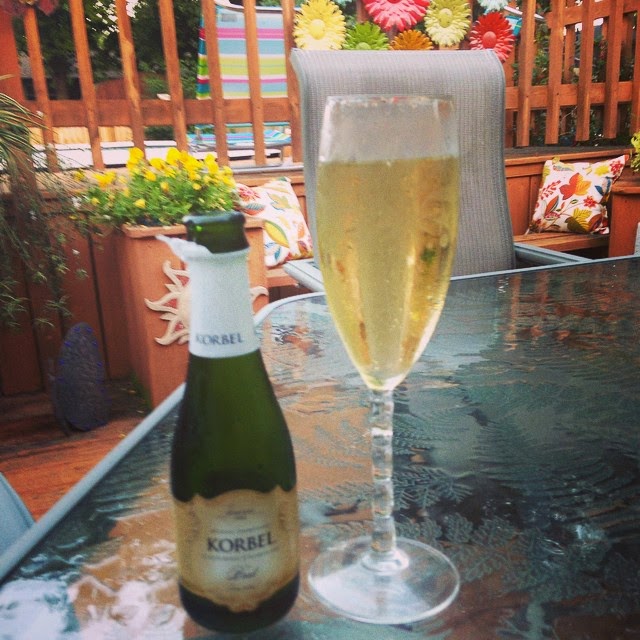 And I celebrated one of the most important achievements of my year.

Also, in 2014, I started a book club: B3 in K3: Bikes, Bites, & Books. The primary mission of this little endeavor is to stimulate the local economy by biking to a locally owned restaurant once a month to discuss a book connected in some way to bikes. But there are other objectives. To have fun and network with other people who enjoy cycling. To read more about cycling, partly for entertainment, partly for educating ourselves. To have just one more reason to ride our bikes. 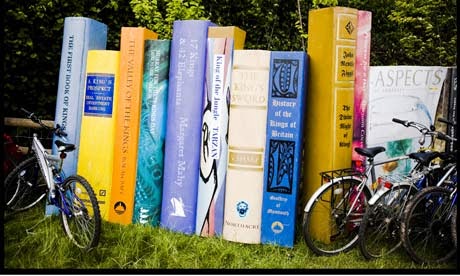 At our first meeting in September, six of us spent a beautiful warmish, fallish evening on the patio at Sammy's Pizza in Bourbonnais eating, drinking a bit, and discussing Colin Beavan's No Impact Man. True, Beavan's cycling life is a small part of the story of his life living as simply as he can for an entire year. But I felt his message was a great way to launch this project forefronting the biking life. 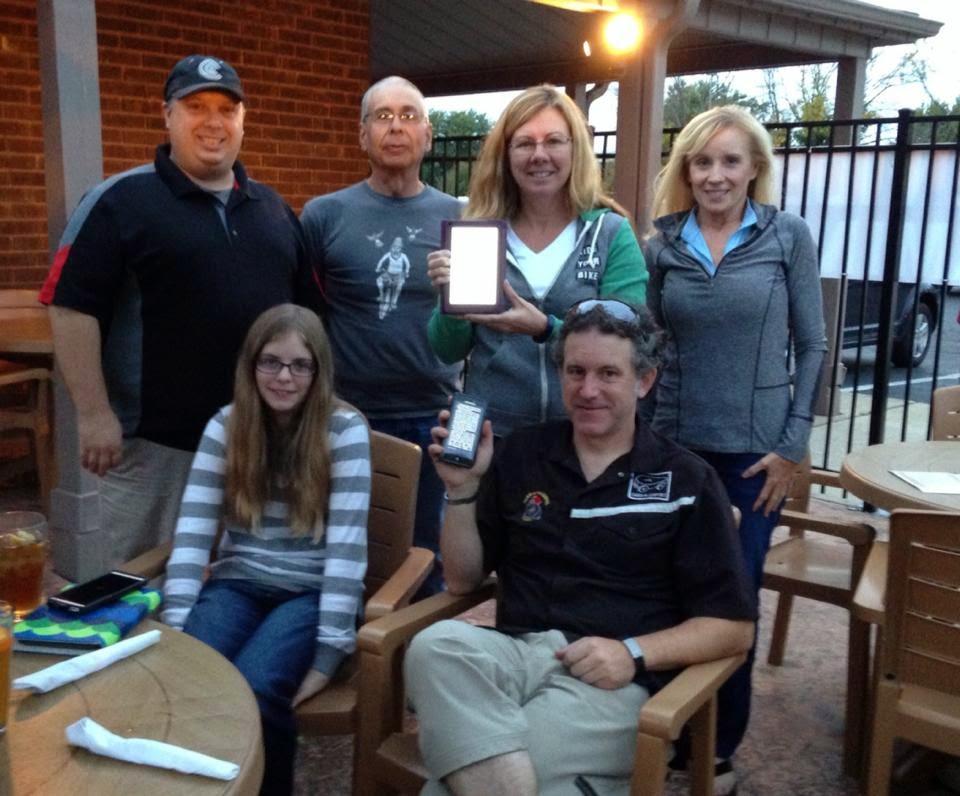 Inaugural meeting of the B3 in K3 book club

Since that first meeting, we have biked to and eaten at Gravina 801, Beggars Pizza, and Grapes and Hops and have read It's All About the Bike, Two Are Better, & Ghost Trails. This project has been so much fun! I am grateful to my devoted book clubbers.

One more exciting thing to mention. I organized my first annual Joy Ride. It was pretty informal and low key but fun as hell... and ended up being my most joy-filled day of the holidays. Spontaneous fun at Grapes and Hops after our short holiday ride. 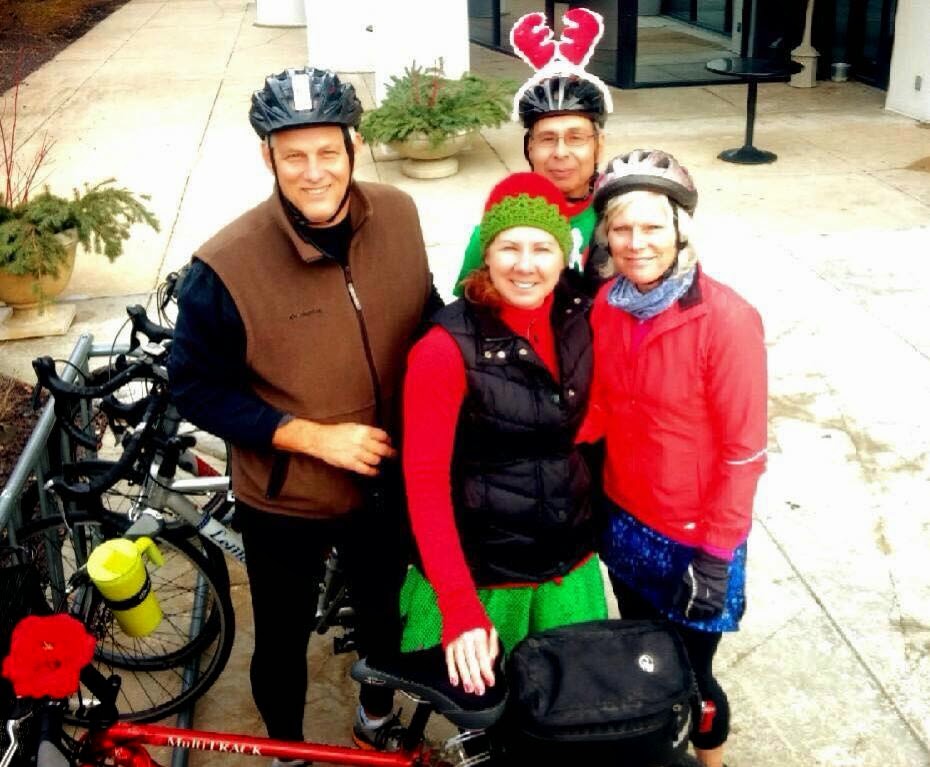 A stop at the Winter Market at the Kankakee Public Library 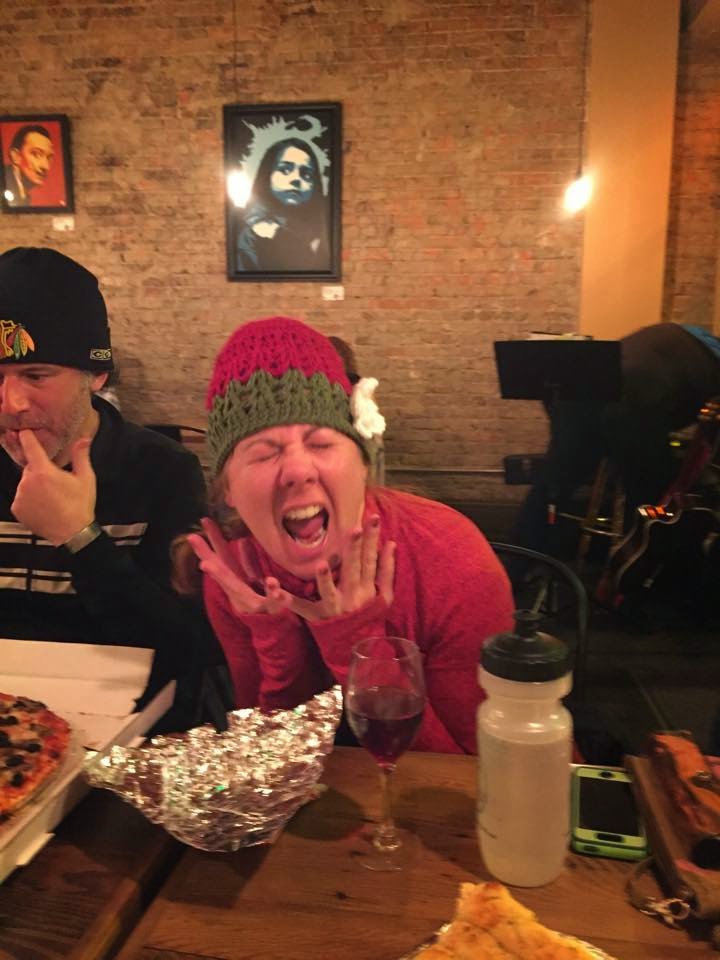 Yes, it was that awesome.

So, as briefly as I could summarize it, here is a glimpse into my 2014. Not a bad year at all.
Labels: #30DaysofBiking B3 in K3 biking books goals