I spent the past two Fridays over in Fruita, Colorado. The trip on the 7th was my first time visiting, and I rode the 15 miles there on my folding bike via the Colorado Riverfront Trail. It was quite hot, as the trail is in full open sun and this is the desert and all. 103 degrees this day. I figured it was only 15 miles down the trail, with low humidity, and I had water. Well, I sort of misjudged that.
My plan was to go fairly early and return fairly early before the full blown 103 degrees hit. But when I got there, I was really, really, really hot and went in full pursuit of rehydration before looking around the town at all. I popped my head into a bike shop (because those folks usually know) to ask where I could get a good locally brewed beer. Copper Club was recommended, so I went there for one that ended up being four (if I counted correctly). I met some really nice people (who all seemed to be transplants from Illinois), and suffice it to say, I didn't leave early to beat the full-on heat back to Grand Junction. 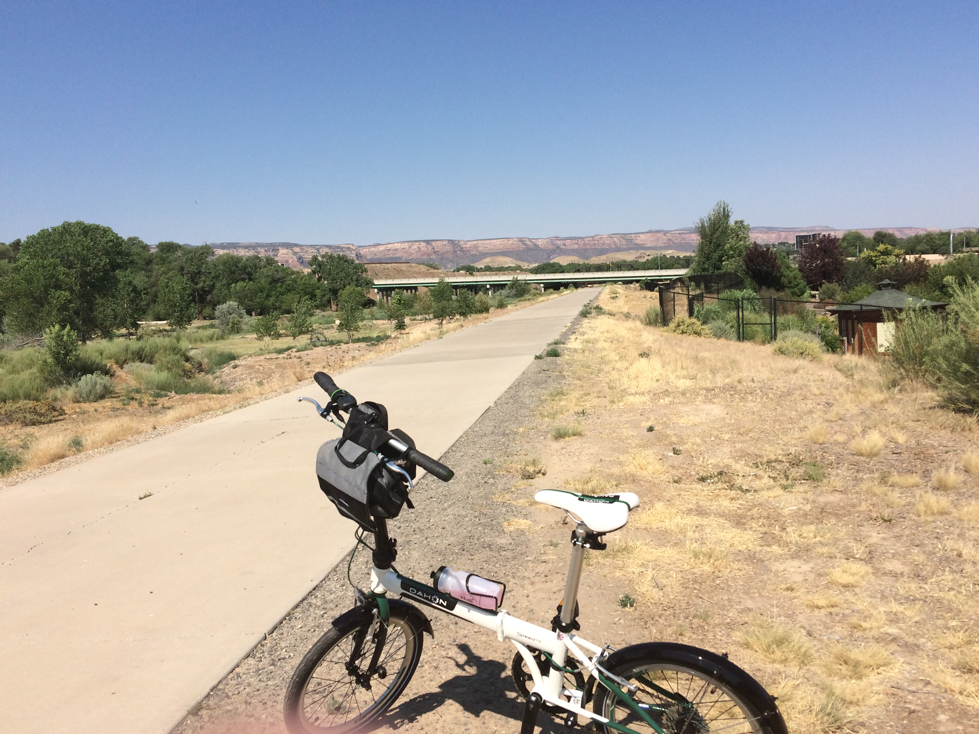 The start of my journey along the Colorado Riverfront Trail to Fruita. 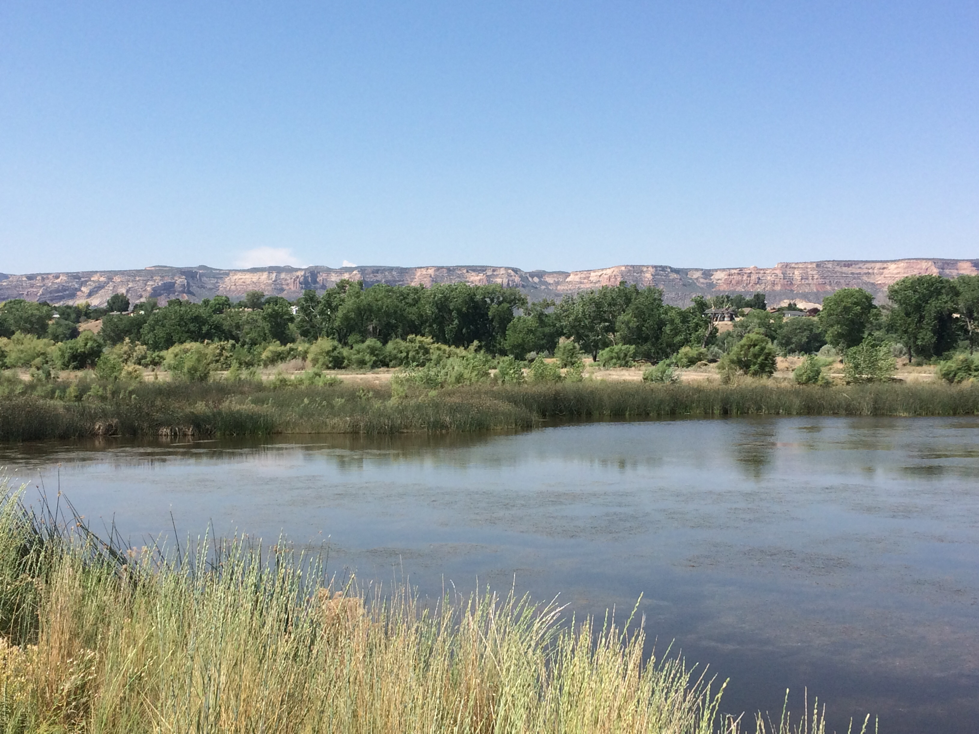 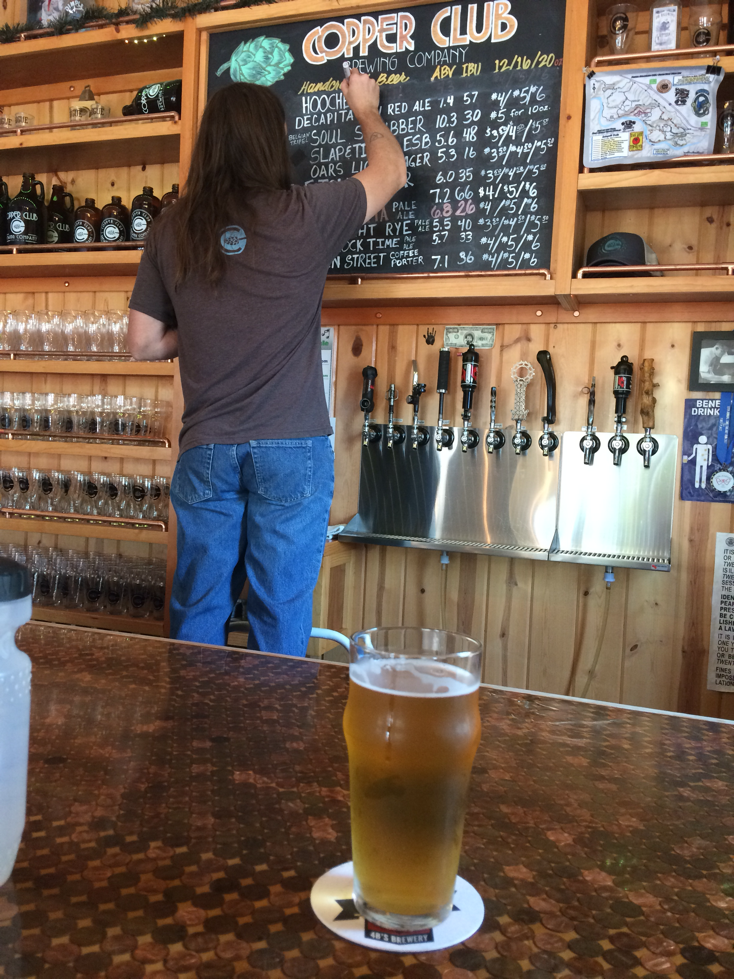 At Copper Club. My beer choice was Oars Light Lager. Nice and cold and refreshing. 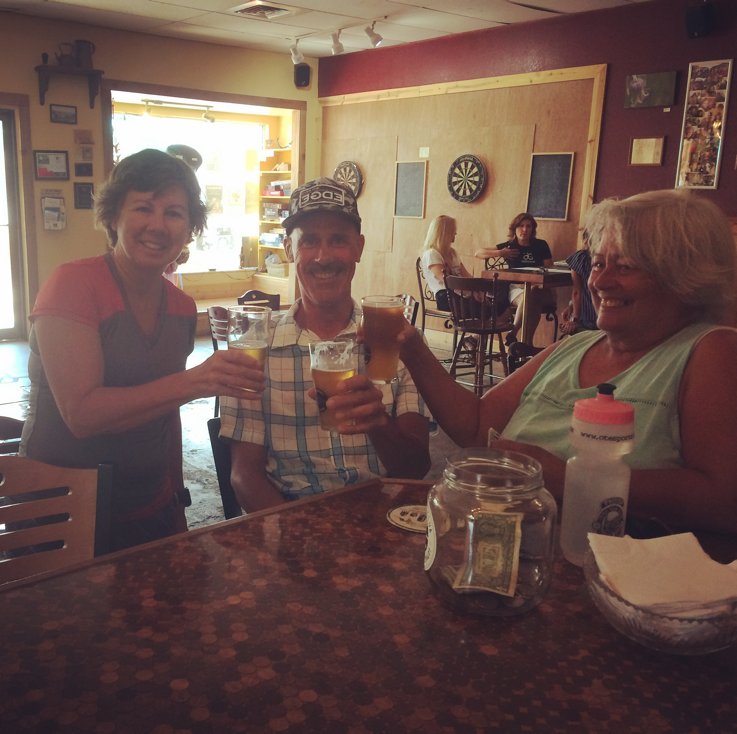 And the company was good. Such friendly locals. This guy, Rod, was in the English grad program at Illinois State University at about the same time I was. As they say, what a small world. This woman was also an English major (I forget where) and moved to Fruita from Illinois. Fruita apparently is where all the old English majors from Illinois eventually end up. Not a bad place to end up. 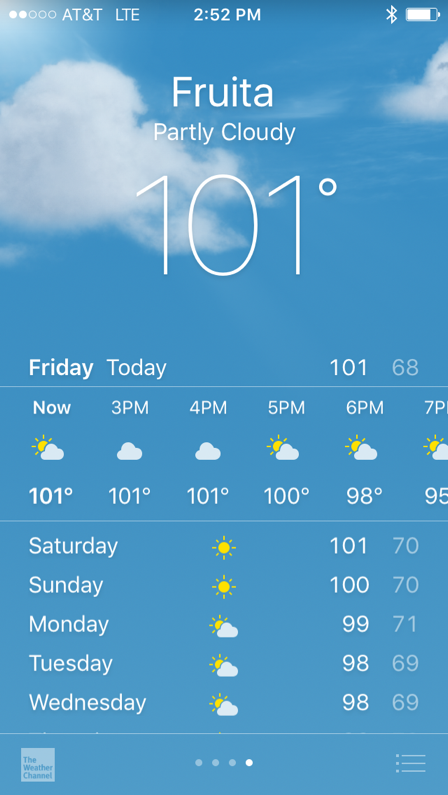 Oh, about mid afternoon and about midway through my rehydration mission. So, yeah, by the time I headed back, it was full blown hotter than hot and a mini dust storm arose out of nowhere. I made it back to Grand Junction before dark, though, and all was good.
A week later, my son flew into Grand Junction for a weekend visit. I wanted him to see Fruita, so this is how Friday #2 in Fruita came to be. I couldn't talk him into renting a bike and biking there with me. Being without a car, that left the Grand Valley Transit as our best option. I was not at all familiar with the local bus service, so it was a bit of an adventure figuring it all out. But two buses later, we were in Fruita. And once there I needed a good cup of coffee pretty badly since we had breakfast at a local place in Grand Junction, and the coffee was atrocious. (Why do breakfast joints always have shitty weak coffee?)
We found Bestslope Coffee Company, and I couldn't resist trying out a Lavender Latte even though I am not one for adding syrups to my latte. Because lavender is big in this region of the country, and this syrup was made right there at Bestslope, I gave it a try. It was a different taste for me, but very good. I'd probably have it again at some point but don't foresee lavender latte being an everyday thing for me. 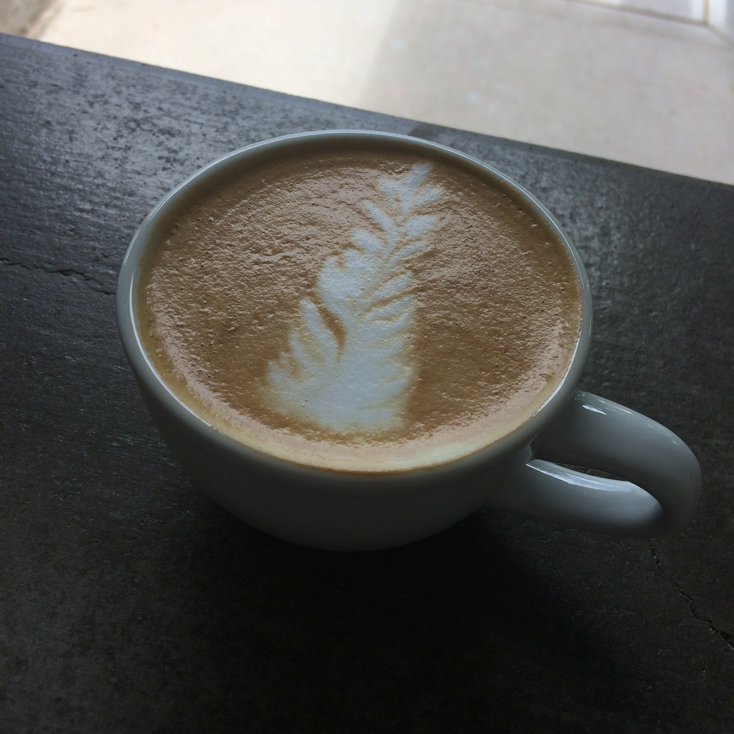 After coffee I was ready for beer. And, of course, it was hot out again. Really hot. Too hot to walk around much. Copper Club naturally was the answer and again did not disappoint. 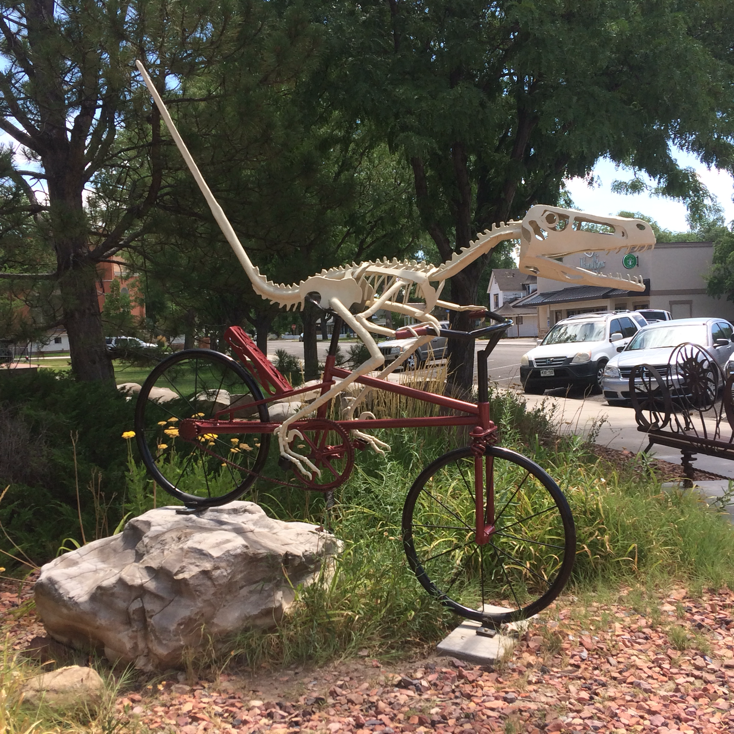 Fruita has character. It has become a big biking Mecca right alongside Moab. It is small, friendly, and there are bold reminders of the cycling culture all over town... bike shops, bike sculptures, bike clubs, mountain biking trail sketches on the wall of the bathroom at the coffee place...
Fruita is also a pleasant reminder that there are still real good places to be in America. And, I do mean real.
Glad I met ya, Fruita.

Labels: biking Colorado on the go