On The Go: Kankakee to Grand Junction Aboard the California Zephyr

This journey began on July 4th. I boarded the Spirit of New Orleans in Kankakee around 7:20 a.m. to get to Chicago's Union Station to board the California Zephyr for a 25-hour trip to Grand Junction, Colorado.
I probably lost a number of you right there on the 25-hours-on-the-train part. But I thought it sounded much better than driving 20+ hours. I hate driving anywhere anymore. Did you know that the National Safety Council's latest data shows a 6% increase in 2016 in traffic fatalities? They estimate 40,000 people died in the U.S. in a car crash in 2016. 40,000 PEOPLE! Sorry to be a Debbie Downer, but that shit scares me, yet nobody else seems to be alarmed by those numbers. Anyway, driving stresses me out a lot. I wanted to sit back and see the passing landscape and eat and have a beer or a glass of wine and meet people.
Yes, I could have flown in a few hours time, but I really sort of enjoy being able to move around on a train and to be able to get a meal, and, again, to see the passing landscape. Plus, it's easier to travel with a bike on the train, although Amtrak still has a long way to go in that department. I have a story about the rude Amtrak customer service agent in Chicago who has "worked there 27 years and knows the policy" yet clearly doesn't. I will save that story for another post about the logistics of traveling with a bike on this trip.
We pulled out of Union Station at 2 p.m. on Tuesday, and I spent most of Tuesday in the observation car. That is the social place to be, the place where complete strangers feel at ease to ask the basic questions "Where are you from?" "Where are you headed?" all while watching the landscape roll by much in the same way one watches a campfire. It's mesmerizing, and time flies by as you take in the nuances of gradual landscape changes. On this trip the flat cornfields of Illinois give rise to some hills near the Mississippi River then eases back into the fields of Iowa. But Nebraska, I'm clueless. I slept through Nebraska and awoke to flatness in eastern Colorado when I thought I would be waking up to mountains. One of the big reasons for this trip was because I felt my soul needed to see the mountains, so when I woke up to flat Colorado, I felt as if I was NEVER going to see the mountains. But soon we did. It wasn't long until we rolled into Denver, and the landscape evolved into majestic beauty for hours and hours on end. 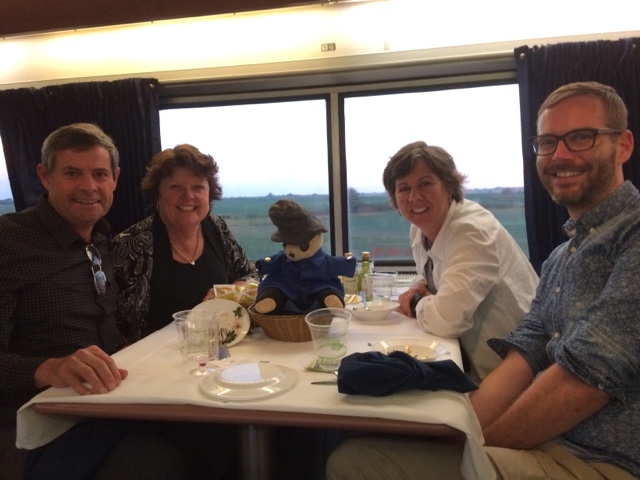 Dinner time on Tuesday aboard the California Zephyr. You are seated with other people, and truly that is part of the fun. The couple on the left side of the table is from Australia and has been traveling all over the United States (taking fun photos with their bear for their friends and family at home). The guy sitting next to me works in theater in Los Angeles.
Here is a short video as we moved through Illinois cornfields:

In this short video, we are crossing the Mississippi River from Illinois into Iowa:

And now some Colorado landscape!: 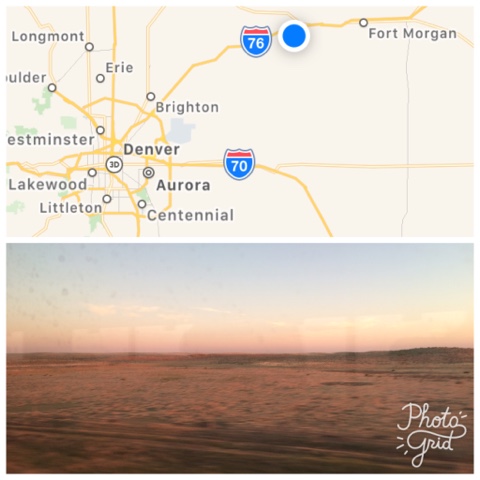 Waking up to more flatness in eastern Colorado. 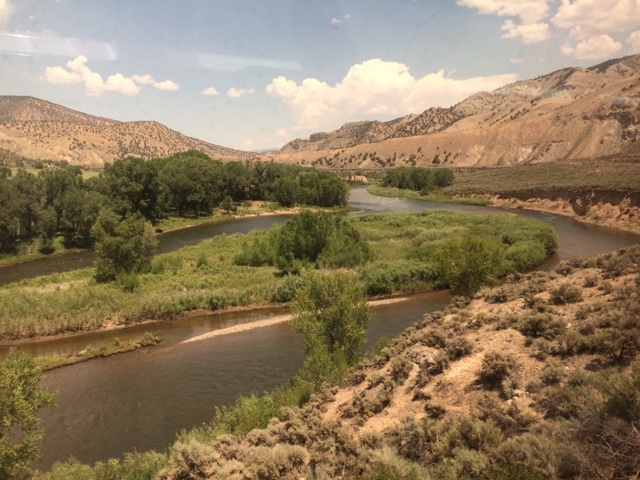 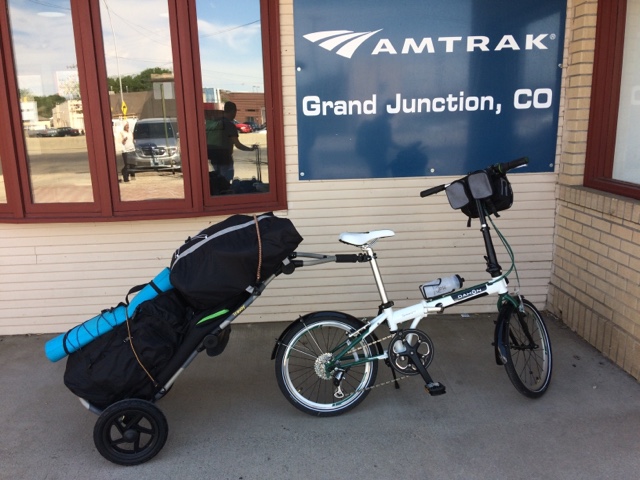 And I made it to Grand Junction. All loaded up here and ready to roll on to my first AirBnb.
Labels: bike stories biking on the go travel